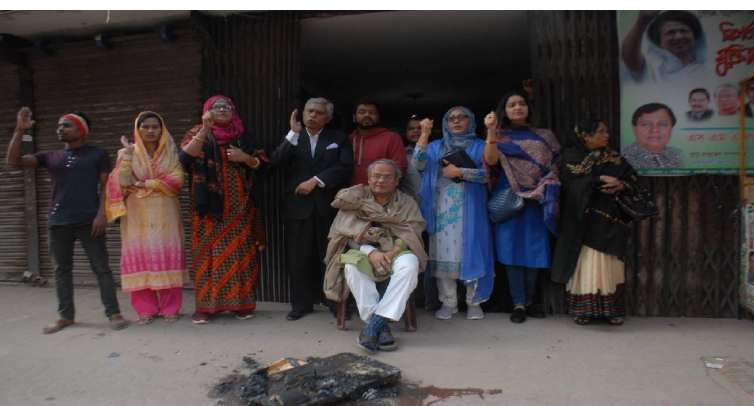 Though the party joined the elections to the two Dhaka city corporations as part of its ‘movement’, BNP has failed to take its supporters and polling agents to polling stations during the voting on Saturday, exposing its political bankruptcy and weak leadership once again, say political analysts.

They also said the party’s decision to enforce a hartal rejecting the results of the city polls also manifested its policymakers’ inability to understand people’s pulse and work out effective and time-befitting action programmes.

They said its leaders should overhaul the party and take a well-designed political strategy to stage a comeback in politics with pro-people action programmes.

Dr Tarek Shamsur Rahman said BNP did not take the city elections seriously as the party might have a perception that they would not be allowed to win the polls.

“Their (BNP leaders’) body language during the campaign gave me an impression that the party didn’t have the strong resolve to come out successful in the election. I also think the party leaders didn’t get proper guidelines from their acting Chairman Tarique Rahman about the elections,” he observed.

The political analyst also said BNP had no strategy to take its leaders and activists to the polling stations and ensure their party candidates’ election agents there. “This is a serious weakness of the party.”

He also did not like the dawn-to-dusk hartal enforced by BNP in the capital protesting ‘irregularities’ in the elections to the two city corporations. “People now don’t support hartal and they have an anti-hartal sentiment which was again proved today as people didn’t respond to it. I think BNP leaders exposed their political bankruptcy by announcing the hartal going against people’s sentiments.”

The JU professor said BNP has failed to work out effective political action programmes and a well-thought-out work plan to reorganise the party and boost the morale of its grassroots leaders and activists.

He said BNP leaders should now design an effective plan to stage a comeback in politics reorganising the party.

Dr Tarek said BNP leaders also need to go to their grassroots leaders to take their opinions and organise the party and take preparations for remaining active in politics.

Sujan General Secretary Badiul Alam Majumdar said he visited seven voting centres but did not find the agents of BNP candidates at any of those.

“BNP joined the polls as part of their movement and declared to remain in the field till the last moment together with their supporters, but their sincerity for the voting was not reflected as they didn’t put in efforts to go the polling stations, manifesting the party’s organisational weakness,” he said.

Badiul Alam, also a political analyst and election expert, said BNP is failing to reorganise the party and invigorate its rank and file due to a leadership crisis.

He also said the political weakness of a major opposition party like BNP is one of the reasons for destroying the country’s election system and waning people’s confidence in voting.

Dr Zafrullah Chowdhury said BNP cannot act as a major party due to its leadership crisis.

“BNP leaders always wait for messages from London and make only hollow statements, but they could neither overhaul their organisation nor work out any strategy to rejuvenate their grassroots and strengthen the party. I think BNP didn’t have any plan and strategy to win the city polls,” he observed.

Dr Zafrullah, known as a BNP sympathiser, said the party should not have called hartal suddenly without preparing leaders and activists to observe such a programme.

He also said BNP acting Chairman Tarique Rahman should now stay away from politics enabling its standing committee to take the right decisions and reinforce the party.

Contacted, BNP standing committee member Khandaker Mosharraf Hossain said their party was serious about the election, but the government held a ‘controlled election’ using the ‘state machinery’. “Our party leaders and activists tried to go to polling stations, but they failed due to obstruction and intimidation by ruling party cadres.”

About the hartal, he said their standing committee took the decision unitedly as they thought people should be given a chance to register their protest through a programme like hartal.

BNP Secretary General Mirza Fakhrul Islam Alamgir said people did not go to polling stations as they have lost their confidence in the voting system due to the ‘foul play’ by the government and the Election Commission.

He claimed that people made their party’s hartal programme a success with their ‘spontaneous’ support, thanking them for support to the hartal announced within a short time.