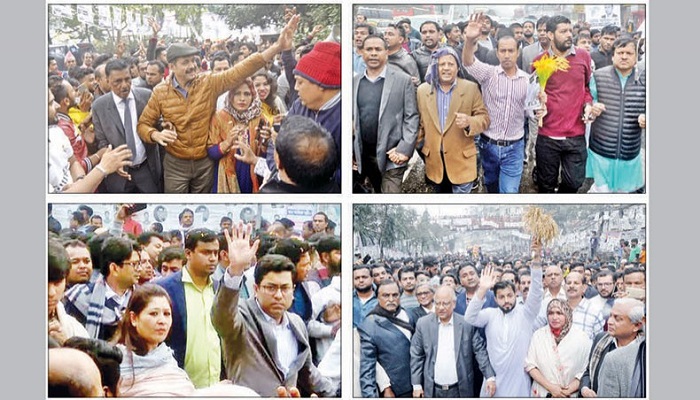 Around 54, 63,467 voters will cast their vote to elect the mayor and ward councilors and reserve word councilor posts in the election.

Chief Election Commissioner KM Nurul Huda said “None is conducting any search or raid in homes. We have told law enforcers that those who have no work in Dhaka should stay away from the city until the polls are over.”

“They have been also asked to take action against any unnecessary gatherings close to the polling centers,” he said

The Election Commission will distribute EVMs and other electoral materials on Friday.

For the first time, the entire elections will be held using electronic voting machines (EVMs) instead of traditional ballot papers. The voting will be held from 8:00 am to 4:00 pm without any break.

Mayoral and councilor candidates passed a busy time to woo voters until the last minute. Most of the heavyweight mayor candidates carried out hectic efforts to win the hearts of the electorate as they aimed to win in the keenly contested polls.

Meanwhile, the Election Commission has completed all necessary preparation to hold free and fair elections.

Without taking measures against poll code violators, the EC has directed law enforcers to maintain peace for smooth mayoral elections which is under the local government.

The Returning officer of DNCC got 60 written complaints, while the DSCC got 107, with probes completed in most cases and defaulters, were warned.

The DNCC has 54 wards while DSCC has 75 wards. One councillor from each ward is elected directly.

The election commission imposed restriction to show of fire arms in the electoral area from 6:00am between January 30 and 12:00 AM on February 3.

It also imposed a 54-hour ban on the movement of motorcycles in the capital ahead of the city election from Thursday midnight until Sunday morning.

Movements of other vehicles have also been restricted for 18 hours but it will come into effect from Friday midnight in the election areas.

Operating of baby-taxi or auto-rickshaw, taxicab, microbus, jeep, pickup, car, bus, truck and other motor-driven vehicles will be restricted from January 31 midnight (12am) to February 1 evening (6pm).

Motorcycles and vehicles with EC’s stickers, vehicles of emergency services, including ambulance, fire service and postal department, will remain out of the ban’s purview.

A total 43 executive magistrate 18 for DNCC and 25 for DSCC have been deploying during election campaign will be deployed for election duty from January 30 to February 2.

Without this 129 executive magistrate 54 for DNCC and 75 for DSCC have been deployed with mobile striking force.

The Election Commission has formed a central monitoring and coordination cell to monitor the law and order situation during the election.

The cell will monitor the overall security during the election and informed it to the commission, said a source of the EC.

They will also give direction to the law enforcers got from the commission immediately after any untoward situation. NID wing's Director General Brig Gen Mohammad Saidul Islam will lead the cell.

The cell will coordinate the arrangement of law enforcing agencies through the representative of each of the law enforcement agencies.