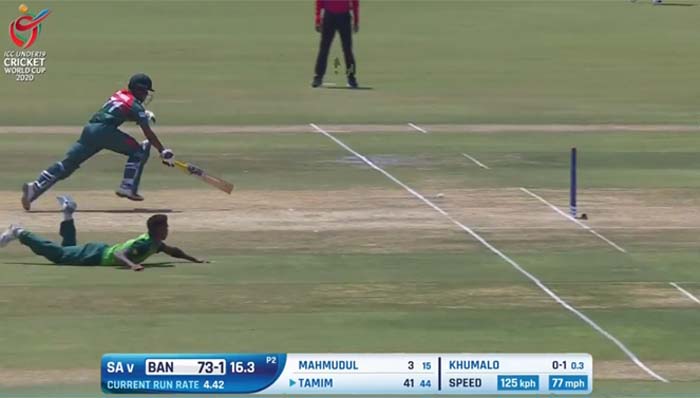 Bangladesh U-19 cricket team posted a fighting score of 261 runs in the Super League Quarter-final-3 losing 5 wickets at the Potchefstroom in South Africa on Thursday.

Shahadat made 74 off 76 balls was the highest scorer of Bangladesh side.

The victory in this match would help Bangladesh seal the semi-final of the tournament.

The Junior Tigers’ highest success in the Youth World Cup is to achieve third place in 2016 tournament beating West Indies by three wickets when Mehedi Hasan Miraz led the side in the tournament, hosted by Bangladesh.

Bangladesh came in South Africa with an aim to surpass the previous result and thing went well until the last game against Pakistan. The Bangladeshi youth beat Zimbabwe by nine wickets through D/L method before crushing Scotland by seven wickets.

But they were reduced to 106-9 against Pakistan in the last group match. Only the rain saved them from ultimate blushes as the match was washed out, helping Bangladesh to be the group champion by virtue of net-run-rate.