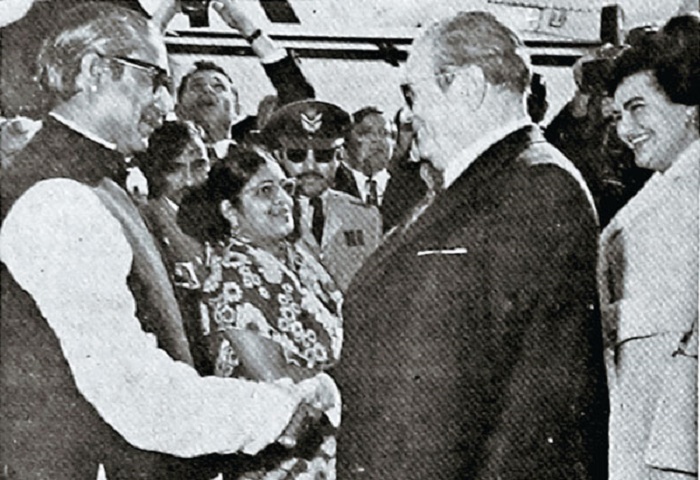 The President of the Socialist Federal Republic of Yugoslavia Josip Broz Tito paid an official visit to Bangladesh from 29 January to 2 February 1974. President Mr Mohammadullah and Prime Minister Bangabandhu Sheikh Mujibur Rahman warmly received him at the airport. During the visit, he called on the President of Bangladesh and discussed issues of mutual interest. Our President also gave a banquet in his honour.

President Tito led the Yugoslav delegation and Bangabandhu led the Bangladesh delegation at the bilateral meeting that was held in a very friendly and cordial atmosphere and marked by mutual understanding. They discussed matters of common interest covering bilateral and international issues.

The two leaders expressed identical views on international issues as well as satisfaction over the positive development of relations in the world, reflected particularly in the growing aspiration of the peoples to consolidate and to safeguard their independence and to influence their own socio-economic emancipation and active participation on the international scene with a view to ensuring lasting peace, independence and social progress. They pointed out that peace and stability in the world was still threatened, gap between developed and developing countries was widening, colonisation and violation of fundamental human rights was continuing in Africa.

Both leaders reaffirmed that the policy of non-alignment to which they were deeply committed, constituted an irreplaceable factor for the most adequate reflection of just aspirations of the peoples throughout the world. They expressed their satisfaction for the increasing number of countries confirming their adherence to this policy of non-alignment movement. Both reiterated their resolve to make maximum contribution to the implementation of the decisions and conclusions of the 4th Summit Conference of the non-aligned countries held in Algiers. They also stressed the need for greater efforts to promote the unity and solidarity of the non-aligned countries and agreed to hold an early meeting of the member countries.

Bangabandhu briefed the recent developments in the sub-continent and the constructive and positive approach of his government for normalisation of relations among the countries in the region. President Tito highly appreciated the consistent efforts of the government of Bangladesh under the leadership of Bangabandhu and his initiatives in the creation of an environment of peace in the sub-continent. They opined that all such efforts, particularly the full implementation of the Delhi Agreement would further improve the climate of relations in the sub-continent and would pave the way to the establishment of lasting peace and good neighbourly relations there.

While President Tito outlined the recent developments in Europe following the conference on security and co-operation, Bangabandhu expressed satisfaction at the process of relaxation of tension and progress of negotiations in Europe in which Yugoslavia had made a significant contribution. They expressed their deep conviction that peace and security were indivisible and that detente and peace should embrace the whole world.

They stressed the urgency of settling down the Middle East crisis to ensure peace in that area. Both leaders opined that this could be achieved only on the basis of complete withdrawal of Israeli forces from the occupied Arab territories and the realisation of the legitimate rights of the Palestinians.

The two leaders emphasised that the Saigon regime and those enabling it to lead this part of the world to a brink of new danger of war by violating the Paris Agreement were responsible for the dangerous situation in Indo-China. They opined that peace in Indo-China and in South East Asia as a whole could only be achieved by implementing the Paris Agreement on Vietnam and the discontinuation of outside support and assistance to Lon Nol’s regime in Cambodia. They condemned the overthrow of Allende’s democratic government in Chile by military. They also announced their support to the efforts of the Latin American countries for their struggle to determine their full political and economic sovereignty.

President Tito and Bangabandhu reviewed all issues of bilateral relations and expressed their satisfaction at the progress in various fields. They confirmed the readiness of their respective government to continue and to promote further the existing cooperation and agreed to hold regular consultations on political and economic matters. Bangabandhu apprised President Tito of the objectives and targets set in the First Five-Year plan and sought Yugoslavia’s cooperation in achieving the goals. President Tito appreciated Bangladesh’s efforts and assured their all possible cooperation. They also reviewed the progress of trade and commercial relations between the two countries and agreed to take necessary steps to increase cooperation in this sector for mutual benefits.

Bangabandhu hosted a banquet in President Tito’s honour on 30 January. In his banquet speech, welcoming President Tito and his entourage Bangabandhu said, “Our people, who have always held you in great esteem and admiration, have had the opportunity of receiving you as early as in 1968. Your presence visit, however, is of special significance as it is your first visit to sovereign independence Bangladesh. It is indeed needless to recall, particularly in your presence, that independence was achieved through a war of liberation following two centuries of colonial exploitation. Our people succeeded not only in shaking off this colonial bondage, but have also taken the first steps to build out of the ruins of a war-devastated country, a new society, free from exploitation, in accordance with their wishes and aspirations.” He recalled with deep gratitude the material and moral support of the government and people of Yugoslavia during our liberation war and since independence. Bangabandhu also thanked President Tito for raising his voice with other world leaders to save Bangabandhu’s life from Pakistani gallows.

Appreciating the natural and spontaneous friendship and cooperation that had emerged between the two countries, Bangabandhu said, “You have succeeded admirably in guiding your country along the path of socialism and have led your people to progress and prosperity. We, on our part, have also set socialism as a principal goal of our state policy and are determined to achieve it through the democratic process in the context of our own environment.” He also gave a briefing on the developments in Bangladesh’s domestic field including local government elections and launching of the First Five-Year plan.

While congratulating President Tito on his getting the Jawaharlal Nehru Award for international understanding, Bangabandhu said, “Your foresight, sagacity and perseverance from the days of the Belgrade Conference in 1961 have carried the concept of non-alignment from the nascent state to one where it is widely acknowledged as a dynamic force, which is significantly contributing to the promotion of peace. We, in Bangladesh, also share your commitment to the cause of peace and to the principles of non-alignment – the democratisation of international affairs, peaceful co-existence, non-interference in the affairs of state and mutual respect for each other’s sovereignty.” Acknowledging Yugoslavia’s support for Bangladesh’s participation in the non-aligned Summit held in Algiers, Bangabandhu expressed his confidence that the two countries would together do their best to implement the political and economic resolutions adopted at that Conference.

Bangabandhu, who raised his thunder-voice to establish peace all over the world, said, “Our commitment to peace is total, since only in an environment of peace can we consolidated our independence and concentrate our energies and resources to wage war against poverty, hunger, disease and unemployment.” He mentioned that Bangladesh had consistently been following a constructive and forward looking policy aimed at normalisation of relations between the countries of the sub-continent. He also expressed his belief that full implementation of the Delhi Agreement would pave the way for durable peace in the region.

Regarding peace in West Asia, Bangabandhu said, “Despite the achievement of a limited agreement, no stable peace can, in our view, be attained there until the Arabs have recovered their territories illegally held by Israel and the legitimate rights of the Palestinians have been restored.” They both re-affirmed their full support to the just cause of the Arabs and the Palestinians as well as to all struggles against colonialism, imperialism and racialism throughout the world.

At the end, Bangabandhu said, “There has been very substantial progress in our relationship in the short period since our independence. I am confident that the close bonds of friendship and cooperation between our two countries will be further strengthened in the years to come.”

President Tito did not give any speech at the banquet hosted by Bangabandhu, but he spoke at the banquet given by our President on 29 January. He said that the two countries were geographically far away from each other, but they were very close according to their wishes and endeavours and both had wished to live independently in their own created happiness. On non-aligned conference held in Algiers, he said, “At this historical conference, we have adopted very important decisions which are already being implemented. But we have to try to foster that implementation in today’s international situation, to do it more rapidly in order to have the situation in our hands and to prevent various attempts to destruct the unity of the non-aligned countries and to introduce neo-colonialism in some parts of the world.”

The Yugoslav President also gave a speech at our parliament on 31 January. He said, “In the short period since Bangladesh achieved its independence, very friendly relations have been established between our two countries. We have followed your struggle with sympathies. We have felt compassion for you because of the great sacrifices you have made for your freedom. After the achievement of your independence, we have followed with the same interest the efforts you have exerted in order to heal as soon as possible the wounds of the recent past and to overcome the consequences of the war destruction.” He said that through its struggle for self-determination and equality and through its policy of peaceful cooperation with all countries and democratic forces, Bangladesh had become a significant factor of peace and stability.

In his speech, though the non-aligned conference held in Algiers was highlighted, but  some of the international crises like- coup d’état in Chile, aggressive policy of Israel in the Middle East, war in Vietnam and Cambodia, freedom struggles in Africa and the Palestine issue were also touched. He talked about international economic situation, particularly the widening gap between developing and developed countries, food and trade. President Tito concluded his speech by saying, “Coordination and continuous activity of the non-aligned countries are indispensable for the successful accomplishment of the important tasks facing them, for the further assertion of the policy of non-alignment, for the further strengthening of their cooperation and solidarity.” He also hoped that Bangladesh would, in the shortest possible time, be an UN member.