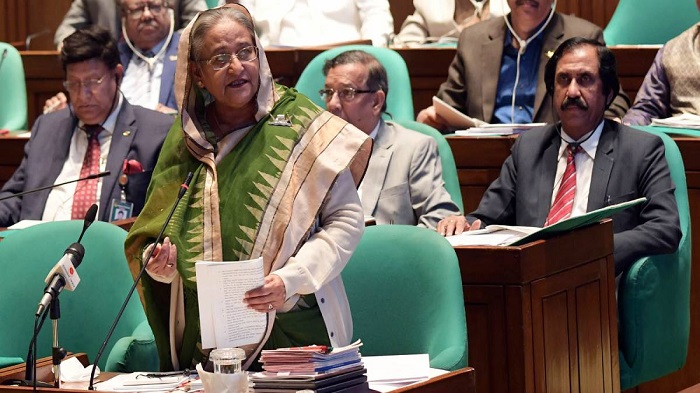 Mentioning that wearing headscarves by girl students at Motijheel Ideal School and College not banned, Prime Minister Sheikh Hasina has said her government is always aware about taking legal steps against any activity that hurts the religious sentiment.

“The Education Ministry in its investigation didn’t find the authenticity of the allegation of banning headscarves by female students at the institute. Its governing body also didn’t take any decision to ban wearing headscarves by its girl students,” she said on Wednesday.

Ranga, in his question, asked the Prime Minister whether it was true that Motijheel Ideal School and College has banned wearing headscarves by girls in their classrooms.

“The present Awami League government is determined to uphold the spirit and values of Islam, Hindus, Buddhist, Christian and other religions. This government is always conscious about taking legal measures against any activity that hurts the religious sentiment and norms… Bangladesh is an independent, sovereign and secular country,” Hasina said.

In reply to a supplementary question from BNP MP Md Harunur Rashid (Chapainawabganj-3), the Prime Minister said she keeps eyes on everything though she moves amid security protocol.

Harunur Rashid, in his query, urged the PM to visit different parts of Dhaka city without security protocol to personally know what the young generation wants and thinks about.

Hasina said, “Yes, this is right I move amid security protocol… But it’s also not right that I don’t know the conditions of the city and the country. We keep watch on what’s happening (in the country).”

About the young generation, Hasina said the government is taking appropriate measures so that the youth can return to the healthy life giving up the drug, violence and militancy.