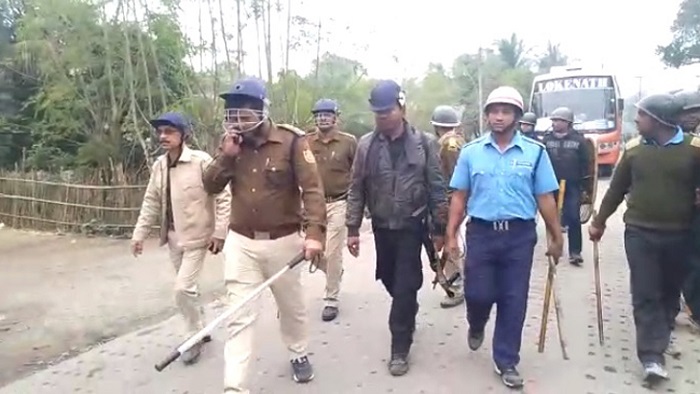 Two people were killed and at least three others sustained bullet injuries when some locals opened fire and hurled crude bombs on a group of protesters demonstrating against the Citizenship (Amendment) Act or CAA and National Register of Citizens (NRC) in West Bengal’s Murshidabad district.

The deceased have been identified as Anarul Biswas (55), who died on the spot, and Salauddin Sheikh (17), who succumbed to his injuries on way to hospital. The three injured have been admitted to hospital.

The incident happened near Sahebnagar market in the Jalangi police station area of Murshidabad district in West Bengal.

The protesters claim that the attackers belonged to the Trinamool Congress (TMC), but the ruling party has denied any role in the incident.

“There is no instruction from our party to suppress any anti-CAA or anti-NRC movement. We firmly deny the involvement of any of our party leaders in the incident. We have requested police to conduct an impartial probe and arrest the culprits,” Murshidabad district TMC president and MP from Murshidabad, Abu Taher Khan, said.

The incident took place a little after 9 am. The protest was part of an all-India bandh called by the Bahujan Kranti Morcha (BKM).

Locals said the demonstration was being held by members of the ‘CAA Birodhi Nagarik Mancha (Citizen’s Forum Against CAA)’, a new organisation formed about 20 days ago which has members from all political parties, including TMC. It was holding demonstration in different parts of Jalangi, demanding revocation of CAA.

On Wednesday morning, TMC’s Jalangi (north) block president Tohiruddin Mondal arrived at the protest site with some of his associates who, the protesters said, opened fire. “Mondal and his men came in five cars and attacked us,” said Imdadul Haque, one of the protesters.

“We were carrying out a peaceful movement. The TMC leadership created the trouble and killed two men. We have heard that Tohiruddin’s brother was hit by a bullet,” said Mustak Ali, a member of the mancha

Tohiruddin’s brother Mantu Mondal is admitted in Murshidabad Medical College and Hospital and is being treated for bullet injury.

“Two people have died in the firing. We have detained a few people. Raids are being conducted to nab the culprits,” said Sandip Sen, a police officer.

The incident led to exchange of allegations between political parties.

Jalangi legislator Abdur Razzak, who won the seat for Communist Party of India (Marxist) but later defected to the TMC, said, “For the last 15 days some Congress and CPI(M) men are holding anti-CAA demonstration under the banner of a new organisation. On Wednesday morning, they were trying to close down shops at Sahebnagar market as part of an all-India strike. Hundreds of students, who wanted to organise Saraswati puja, were facing problems because of this protest. When Tahiruddin Mondal reached the scene and requested them to leave the market area, they attacked our men with firearms and bombs. I have heard that two men have died. The deceased are not associated with any political party,” said Razzak.

“TMC chief Mamata Banerjee is protesting CAA and passing resolution in state assembly while her party leader is killing people who are against the law. This incident has proved that that her party men are supporting the Bharatiya Janata Party,” Murshidabad Congress spokesperson Jayanta Das said.

Salauddin’s father, Nur Islam Sheikh, meanwhile alleged that his son was shot by the pradhan (head) of the local gram panchayat controlled by the TMC. “The TMC pradhan, Milton Sheikh, fired at my son from the roof of a house for supporting the bandh.”

Milton Sheikh was not available for comments.