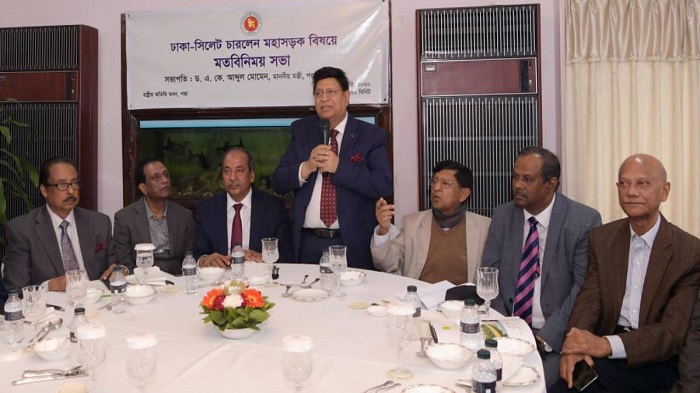 Foreign Minister Dr AK Abdul Momen on Wednesday said they want to see Dhaka-Sylhet multilane and modern highway operational by 2023 which will remain fit for vehicular movement at least for 50 years.

He said the design of the four-lane highway will soon be finalized with some changes to turn the planned highway a modern one making it cost-effective with less journey-time.

“Once the design is done quickly, tender will be floated following approval of the new design,” Dr Momen told reporters after an opinion exchange meeting at State guesthouse Padma.

The impasse over financing of the expansion of 214-kilometre Dhaka-Sylhet Highway into four lanes ended as the Asian Development Bank agreed to fund the project.

“ADB funding is ready,” said the Foreign Minister adding that all relevant MPs have shared their ideas in the meeting.

He also said, “They’re (MPs) very accommodative, it is very good. All of them want quick implementation of the project.”

The Foreign Minister said the entire Sylhet region would be benefited on tourism and industrial fronts once the highway project is implemented which will ultimately contribute to the national economy.

The Foreign Minister said Prime Minister Sheikh Hasina has expressed her desire that all highways will be eight-lane in the future.