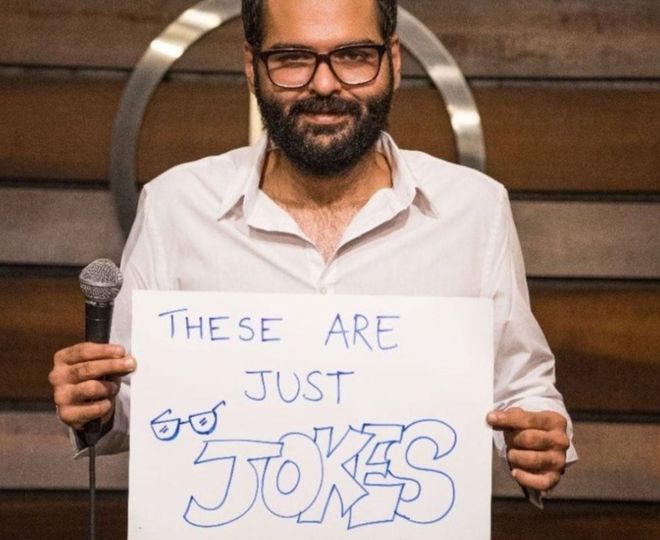 Is it justifiable to enforce a flight ban on a comedian who heckles a popular news presenter on a flight? Especially when reporters from the presenter's channel have done the same to others?

That is the burning question currently being debated on social media, after four Indian airlines banned Kunal Kamra for his "altercation" with Arnab Goswami.

Mr Goswami, who runs the Republic news network, is a popular name in India, but is seen as a polarising figure. He frequently berates his panellists, attacks opposition members and government critics, and is also known to pass judgement on news issues - he has called people names like "traitor" and even advocated going to war with Pakistan.

The encounter occurred aboard a recent IndiGo airlines flight from Mumbai to Lucknow.

Kamra says he met Mr Goswami aboard the plane and "politely asked him to have a conversation", but that the journalist had "pretended to be on a phone call".

After repeatedly trying to ask him questions on journalism, Kamra took the video of him berating Mr Goswami using some of his own catchphrases like "the nation wants to know!" He also repeatedly asks "if Arnab is a coward or a nationalist".

The video quickly went viral - with some quipping that it was the only time they had ever seen Mr Goswami silent. Wearing sunglasses and earphones, he steadfastly ignores Kamra for the entire duration of the video.

The minister, Hardeep Singh Puri, responded by asking all other airlines to follow suit. So far, the national carrier, Air India, and two other private carriers, SpiceJet and GoAir have responded.

Kamra has responded saying "it's not shocking at all to me that for exercising my right to speech, three airlines have given me a temporary ban." He pointed out that he was not disruptive on the flight and always followed the orders of the cabin crew, adding that the only "damage" he had caused was to Mr Goswami's "inflated ego".

He questioned why he had been banned from Indigo for six months when no formal complaint had been made against him and also questioned the decision by the other two airlines.

"This was the first time something like this has happened, so why have they jumped the gun and banned me?"

Many people on social media are also calling the decision an example of "blatant double standards", especially since Mr Goswami's reporters have, in the past, gone up to newsmakers and stridently demanded answers to questions.

Others called the move a "blatantly political decision" - they pointed out that a BJP MP who recently created a row aboard a flight was not punished.

The hashtag #BoycottIndigo has been trending on Twitter, although some of the tweets have been in support of the ban, calling Kamra a "nuisance" and a "threat to passenger safety".

Kamra, for his part does not seem entirely fazed by his ban, or the criticism that has come his way.

In a subsequent statement, he said he was "not sorry" because he did not think he had done anything "wrong or criminal". He also apologised to "every passenger except one".