140,000 children in Bangladesh could die in the next decade unless more is done to fight pneumonia 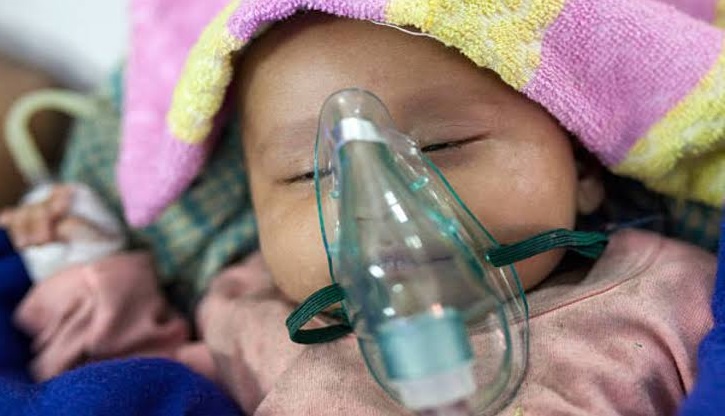 Boosting efforts to fight pneumonia could avert nearly 140,000 child deaths from pneumonia and other major diseases in Bangladesh, new analysis has found.

The modelling by Johns Hopkins University is being released yesterday (Wednesday) as nine leading health and children’s agencies host the world’s first global conference on childhood pneumonia in Barcelona.

Malnutrition, air pollution and lack of access to vaccines and antibiotics among the drivers of preventable deaths from pneumonia—which last year killed one child every hour in Bangladesh

Forecasts show that over 100,000 children under the age of five could die from pneumonia over the next decade in Bangladesh, on current trends, said the UNICEF in Dhaka yesterday (Wednesday).

However, an estimated 48,000 of these deaths would be averted by significantly scaling up services to prevent and treat pneumonia.

Interventions like improving nutrition, increasing vaccine coverage or boosting breastfeeding rates – key measures that reduce the risk of children dying from pneumonia – would also stop thousands of child deaths from diseases like diarrhoea (25,000) and sepsis (33,000).

By 2030, that effect would be so large that pneumonia interventions alone would avert almost 140,000 predicted under-five child deaths in Bangladesh from all causes combined, researchers said.

Pneumonia is caused by bacteria, viruses or fungi, and leaves children fighting for breath as their lungs fill with pus and fluid.

The disease is a leading killer of children in Bangladesh, causing 13% of under-five deaths.

Most pneumonia deaths can be prevented with vaccines, and easily treated with low-cost antibiotics. But very few one-year-olds in Bangladesh are unvaccinated, and more than half of children suffering from pneumonia symptoms do not get access to medical treatment.

Kevin Watkins, Chief Executive of Save the Children, said: “The number of lives that could be saved is potentially far higher as the modelling did not take account of factors like availability of medical oxygen, or action to reduce levels of air pollution, a major risk factor for pneumonia.”

“These results show what is possible. It would be morally indefensible to stand and allow millions of children continue to die for want of vaccines, affordable antibiotics and routine oxygen treatment.”

Tomoo Hozumi, Representative of UNICEF, said: “The poorest and most deprived children in Bangladesh are most at risk of pneumonia deaths. Children from the poorest households are half as likely to seek care and twice as likely to die before their fifth birthday as compared to children from the richest households. Progress to stop children dying from pneumonia is not fast enough and not fair enough.

A multisectoral approach and coordinated plan is required in the areas of health, nutrition, water, sanitation, hygiene and air-pollution. UNICEF, together with Save the Children and other partners, supports the Government of Bangladesh in efforts to combat childhood pneumonia.”

On January 29-31, nine leading health and children’s organisations – ISGlobal, Save the Children, UNICEF, Every Breath Counts, ”la Caixa” Foundation, the Bill and Melinda Gates Foundation, USAID, Unitaid and Gavi, the Vaccine Alliance – are hosting world leaders at the Global Forum on Childhood Pneumonia in Barcelona, the first international conference on childhood pneumonia.