Leeds back on top of Championship, Rooney scores for Derby 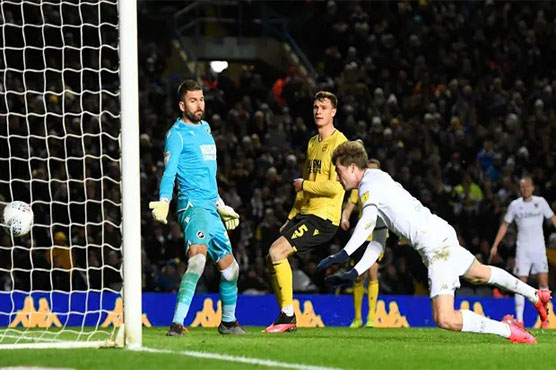 Leeds returned to the top of English football’s second-tier after comingback to two goals down to win a dramatic match with Millwall 3-2 at Elland Road as Wayne Rooney scored his first goal for Derby County.

Leeds appeared destined for a fourth straight defeat in all competitions when visitors Millwall led 2-0 at the interval.

But Marcelo Bielsa’s side hit back after the break with three goals in 15 minutes, Patrick Bamford’s double bookending an effort by Pablo Hernandez.

Bielsa, however, refused to credit his half-time team talk for Leeds’ revival.

“It’s not what I said which provoked the change,” insisted the veteran Argentinian manager.

“Maybe the match looked like it was strange, but it’s a copy of all our matches. A lot of chances to make three goals, the opponent’s goals were similar to what we normally concede.”

But then came Leeds’ fight-back, with Bielsa’s men leapfrogging West Brom into top spot after the Baggies slipped to a 2-1 defeat by Cardiff.

Callum Paterson scored for Cardiff early in the second half before the experienced Charlie Austin equalised with a penalty following a foul by Jazz Richards on Filip Krovinovic. Lee Tomlin’s free-kick, however, restored Cardiff’s lead and extended West Brom’s winless league run to seven matches.

Only the leading two clubs at the end of the regular season are guaranteed a place in the lucrative Premier League next term, with the third promotion place decided by play-off matches involving the next four teams in the table.

Rooney opened the scoring for Derby but it was not enough to prevent a 3-2 defeat by basement club Luton Town.

The Manchester United great, also England’s record goalscorer, broke the deadlock in the 63rd minute yet the Hatters still won for the first time since December 7.

Bristol City made it three straight victories courtesy of Jamie Paterson’s second-half goal in a 1-0 win at Reading.