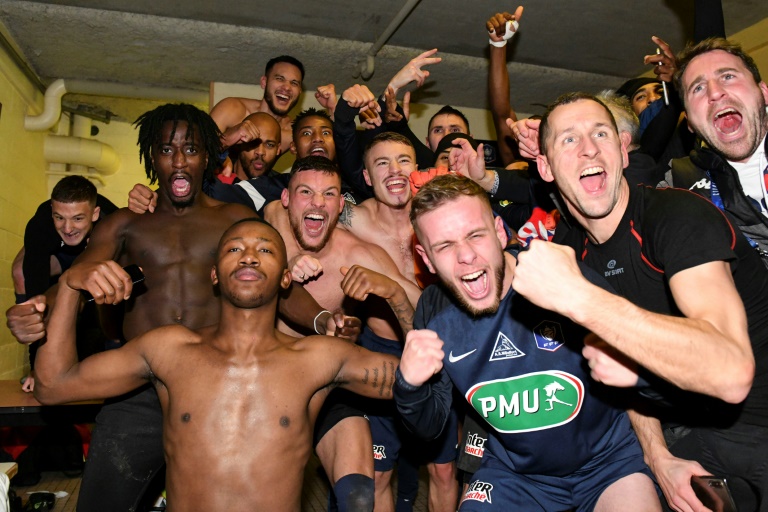 Fourth-tier Belfort made it through to the French Cup quarter-finals on Tuesday after knocking out Ligue 1 outfit Montpellier in a dramatic penalty shootout, while holders Rennes edged a nine-goal thriller with top flight Angers 5-4.

Montpellier are sixth in the French top division but failed to find the net over 120 minutes, and missed two spot-kicks in an emotional shootout.

“It’s magic, there are no words to describe how we feel,” Belfort’s 21- year-old defender Guillaume Arisi said as the players celebrated.

“Now we’re hoping for a tasty draw in the quarters.”

A red card for Montpellier ‘keeper Geronimo Rulli for making a save well outside the box left substitute stopper Dimitry Bertaud to face defeat against lowly opposition.

At the Raymond Kopa stadium Brittany side Rennes were 3-1 ahead going into the final half an hour against regional rivals Angers, who struck twice in the last five minutes through Sada Thioub and Stephane Bahoken to take the match into extra time.

But the side who beat Paris Saint-Germain on penalties at the Stade de France in last year’s final emerged winners when Jeremy Gelin fired home a 25-yard volley to make in 5-4.

Claude Puel led Saint Etienne to a 1-0 win at his old team Monaco, who failed to get an effort on or off target in the first 40 minutes with new boss Robert Moreno struggling to turn them around after a month in the job.

“We defended deep, it was hard for Monaco,” said Puel, who led Monaco to a league title in 2000.