Posters, banners, marches picks up as mayoral polls near 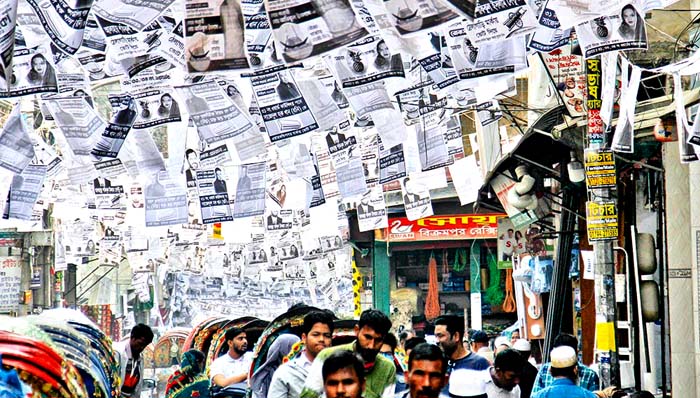 Dhaka has turned into a city of festivity with posters and plasters cover the sky as slogan chanting activists march around seeking votes for their respective mayoral candidates.

Owners of presses are doing a brisk business as they churn out thousands of campaigning materials unseen in recent previous national polls.

Campaigning by both sides of the political divide picked up as polls drew closer with emphasis on seeking votes from door-to-door and war of words by the contestants.

Posters and banners of the aspirants have covered the roads and highways, even plastering walls with posters violating city rules.

A festive mood centering the elections have gripped this overcrowded capital city with slogan-chanting marchers and the electorate putting major challenges to the two new city fathers when they assume the charge of Mayor.

The campaign will end on January 30 and the polls to the two city corporations of  Dhaka is slated for February 1.

Major political parties, including the ruling Bangladesh Awami League along with  opposition Bangladesh Nationalist Party (BNP) and Jatiya Party are participating in the elections of the Dhaka North and Dhaka South City Corporation.

After facing a humiliating defeat in the last parliamentary elections, the BNP decided not to join any election under the Awami League-led government.

However it not only backtracked on its stand but has been fighting the matoral polls with full steam.

The Election Commission is arranging the elections to the two city corporations for the first time under the Electronic Voting Machine (EVM), despite a concern of the BNP.

It has also taken a move to take control over the closed-circuit cameras at those polling centres where the devices had already been set up.

As per a provision of the local government law, the mayoral candidates of registered political parties will contest the polls using the party symbols.

Contestants of the ruling and opposition parties have been the top topic in teea table talks and the aspirants are also making pledges to woo the voters in favour of their respective symbols--- the Boat and Sheaf of Paddy.

The ruling party fielded Atiqul Islam for the DNCC and Fazle Noor Taposh for the DSCC, dropping the incumbent mayor Sayeed Khokan.

The BNP has nominated Tabith Awal and Ishraq Hossain, son of former BNP-backed mayor Sadeque Hossain Khoka, for DNCC and DSCC respectively to test the popularity of the ruling party.

Voters, who are the ultimate source of power, have been waiting to exercise their rights of franchise by electing their representatives for the next five years.

While carrying out the campaign, Atique urged the voters to go to the polling booths and cast votes for the boat symbol, the electoral symbol of Awami League.

“With a target of building a livable city, I have worked for nine months. I want to carry on my task,” he said.

He pledged to address water logging, traffic congestion and a women friendly city.

“Awami League has carried out massive development activities across the country. This town also gets the touch of development. Please cast vote for me to continue the development,” he said.

Ruling party’s another contestant Taposh ran the campaign from historic Rose Garden from where the Awami League was floated as a new political party on June 23 in 1949.

Moulana Abdul Hamid Khan Bhasani and Shamsul Huq were unanimously elected president and general secretary respectively of the new political party that emerged as a rival of the then ruling Muslim League.

The BNP-backed mayoral candidates also pledged for building modern Dhaka if they are elected.

But the EC had to defer the election date which was coincided with Saraswati Puja, a festival of the Hindus.

Last elections to DSCC and DNCC were held in 2015 and Sayeed Khokon and Annisul Huq became mayor of DSCC and DNCC, respectively.

Later, Atiqul Islam became mayor as the post in DNCC fell vacant with the death of mayor Annisul Huq on November 30, 2017, two and half years into his tenure.