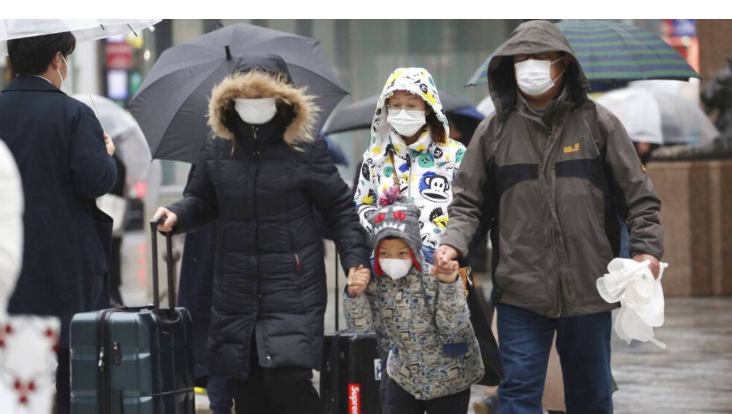 Japan is sending its first chartered flight to China to evacuate Japanese citizens from Wuhan, the city at the center of a deadly viral outbreak. Prime Minister Shinzo Abe said Tuesday that the evacuees will be allowed to go home after quarantine procedures at the airport, but asked them to remain in their houses for about two weeks. Officials say the plane, which is leaving Japan on Tuesday, will also take face masks, hazmat suits and other relief goods for Chinese and foreign residents who remain in the worst-affected province.

Residents of the central Chinese city of Wuhan, confined to their apartments either by choice or by order, are making the best of the situation as their city remains in lockdown amid the outbreak of a new, dangerous virus.

On Monday night, that involved residents of some high-rise apartment buildings joining together, at least in spirit, from their balconies and windows to sing the national anthem and other songs.

The anthem's refrain, "Qilai, qilai, qilai!" or "Rise up, rise up, rise up!" echoed between the towers of skyscrapers in the city of 11 million, where streets have grown eerily quiet as families try to avoid contact with others who might be infected.

Others shouted "Wuhan, fight!" echoing the chants heard from protesters in Hong Kong, where anti-government demonstrations have stretched on for months after officials sought approval for an unpopular extradition legislation.

The death toll from the virus has topped 100 and more than 4,500 have fallen ill from the virus, which can cause pneumonia and other severe respiratory symptoms. More than 50 million people in Wuhan and nearby cities are being kept in place in the most far-reaching disease control measures ever imposed.

In South Asia, where two cases of a novel coronavirus have been reported, countries have intensified preventive efforts to monitor and contain a potential outbreak.

In Sri Lanka, authorities said Tuesday that a Chinese national with the virus wasn't in critical condition. Sri Lanka's Health Minister Pavithra Wanniarachchi said that students the government was arranging to airlift from Wuhan would be quarantined at a military base in the former garrison town of Diyatalawa in the central highlands of Sri Lanka, about 200 kilometers (124 miles) from the capital Colombo. He said that the students would be kept in isolation "for two weeks."

Nepal confirmed its first case on Friday -- a student, who had been studying in Wuhan and had returned home to Nepal during the Chinese New Year holidays. Earlier this week, the government-run National Public Health Laboratory was equipped to conduct tests in Nepal and an isolated ward was set up at the Shukraraj Tropical and Infectious Diseases Hospital in Kathmandu for patients. The Nepalese government has also set up a health desk at the country's only international airport in Kathmandu to check on passengers arriving from China.

Although Bangladesh has reported no case of infection, Prime Minister Sheikh Hasina has asked for arrangements for the "return of Bangladeshi nationals, if willing, from China," the country's junior minister for Foreign Affairs Shahriar Alam said Monday on Facebook. Authorities said the screening of 3,000 passengers from China at Bangladesh airports hadn't identified any cases.

With airport screenings underway, Indian authorities had no reported cases on Tuesday. Raveesh Kumar, spokesperson for the Ministry of External Affairs, tweeted that the government had "begun the process for evacuation of Indian nationals" from the affected area in China and was working out logistics with Beijing.

The Chinese Embassy in Copenhagen is demanding that one of Denmark's largest newspaper apologize for a cartoon on the outbreak of a new deadly virus which it considers "an insult to China."

The chief editor at Jyllands-Posten, Jacob Nybroe, said the cartoon, which shows the Chinese flag with what resembles viruses instead of stars, "didn't intend to mock or ridicule China."

"We can't apologize for something we don't think is wrong," Nybroe said on the newspaper's website. "As far as I can see, there are two different types of cultural understanding here."

The embassy expressed its "strong indignation" and said the cartoon, which was printed Monday, "is an insult to China" and "crossed the bottom line of civilized society and the ethical boundary of free speech and offends human conscience."

China has confirmed more than 4,500 cases of a new virus, with more than 100 deaths. Most have been in the central city of Wuhan where the outbreak began in December.

In September 2005, the Jyllands-Posten published 12 cartoons depicting the Prophet Muhammad that caused outrage among Muslims around the world. Islamic law generally opposes any depiction of the prophet.

South Korea says it plans to send chartered planes to China on Thursday and Friday to bring home some 700 South Koreans who wish to return home from Wuhan, the city at the center of a new coronavirus outbreak.

Lee Tae-ho, South Korea's second vice minister of foreign affairs, said Tuesday that the dates of the flights could change depending on consultations with the Chinese government.

He says South Korea will also use the flights to take 2 million masks and other equipment to China to help with quarantine efforts.

The South Korean consulate in Wuhan has informed applicants for the flights that they would be isolated for two weeks at designated medical facilities after returning to South Korea, which experts say is the maximum incubation period of the illness.

Thailand's Public Health ministry says six more people have tested positive for a new virus, raising to 14 the number of cases in the country.

Sukhum Kanjanapimai, the ministry's permanent secretary, said Tuesday all six cases are Chinese tourists from Hubei province who entered Thailand several days ago. They are from Wuhan, which is the epicenter of the viral outbreak.

All six were admitted to a hospital in Nonthaburi province.

Japan says China has agreed to accept one plane flying from Tokyo to Wuhan to bring home some of the 650 Japanese who say they want to leave the Chinese city at the center of a viral outbreak.

He said Japan has been talking with the Chinese government about such arrangements as it explores "all possible options" to bring the Japanese people in Wuhan home.

Several countries are trying to make similar arrangements for their citizens after China locked down Wuhan and several other cities due to the outbreak of a new virus that has infected thousands.

Germany has confirmed its first case of the new virus that has infected thousands of people in China.

The health ministry in the southern state of Bavaria said late Monday that the man from Starnberg, south of Munich, is "in a clinically good condition."

Officials said the man is being medically isolated and people who were in close contact with him are being informed about possible symptoms and hygiene measures.

The ministry said it considers the risk to the general population in Bavaria to be "low."

Authorities planned to hold a news conference in Munich on Tuesday where they would release further details.

Nearly all of the dozens of cases outside China are among people who recently traveled from the central city of Wuhan where the outbreak began last month.

North Korea said it's taking "emergency steps" to prevent the spread of a new virus from neighboring China.

The North's main Rodong Sinmun newspaper said Tuesday the country is strengthening quarantine measures at airports, ports and border areas and conducting a medical surveillance of those who return from overseas trips.

North Korea hasn't officially reported any cases of the new coronavirus. China has confirmed thousands of cases, and other countries have confirmed the virus in dozens of people who traveled from the central Chinese city where the outbreak began last month.

Tour operators in Beijing said last week North Korea had banned foreign tourists as a precaution against the virus.

China on Tuesday reported 25 more deaths from a new viral disease as the U.S. government prepared to evacuate Americans from the city at the center of the outbreak.

Authorities reported 24 deaths in Hubei province, where the virus first was detected in December, and one in Beijing, the Chinese capital.

No national total was immediately announced but with 81 deaths reported through Monday, that would make the toll at least 106.

The Chinese government has locked down whole cities in Hubei, isolating some 50 million people in a sweeping anti-disease effort.

The U.S. Consulate in Wuhan, the city at the center of the outbreak, was preparing to fly its diplomats and some other Americans out of the country.

Japan, Mongolia, France and other governments also were preparing evacuations.