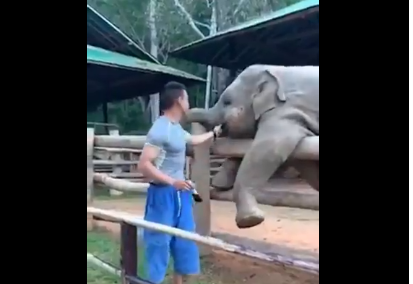 A delightful video shows a baby elephant demanding his keeper's attention and refusing to take "no" for an answer. The video was shared on Twitter by  Indian Rajya Sabha member Parimal Nathwani, and it has left many Twitter users with a smile on their faces.

According to Daily Mail, the video was filmed last year at the Mae-Sa Elephant Camp in Chiang Mai, Thailand.

In the video, the one-year-old elephant calf, named Khunsuk, reaches through his enclosure and taps his keeper, Dan Daeng, on the leg with his trunk. When Dan tries to ignore the jumbo and carry on with his work of painting the fence, the playful elephant continues prodding him till he responds.

Then, as the 20-year-old keeper stands up, grinning in exasperation, Khunsuk clambers onto the fence and affectionately pulls him closer, using his trunk.

"In this adorable video, a young #elephant affectionately reaches out to the fence painter who plays with the animal," wrote Mr Nathwani while sharing the video. "The elephant's playfulness is a treat for the eyes! A great instance of human-animal coexistence."