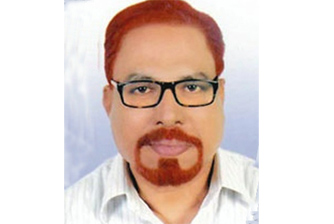 Former president of Jatiya Sramik League and eminent labour leader Shukkur Mahmud died of old-age complications at his residence in Narayanganj in the early Tuesday.

Mahmud left behind his wife, a son, four daughters and a host of relatives and admirers to mourn his death.

The AL general secretary prayed for eternal peace of the departed soul and conveyed profound sympathy to the bereaved family.