In Quest of Excellence in Joint Warfighting 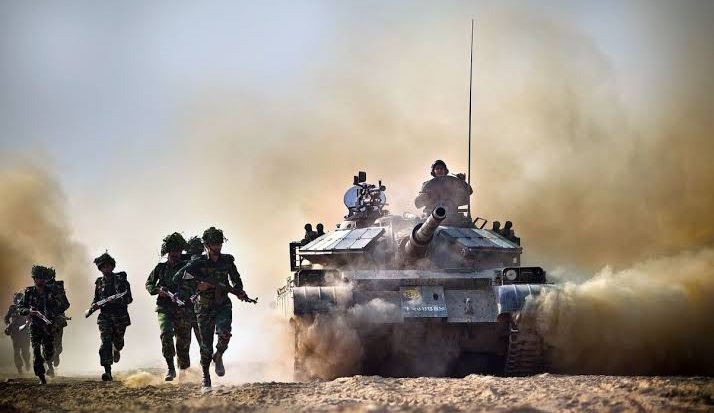 Bangladesh is a peace loving country very much on the highway of development and prosperity today under the able leadership of HPM Sheikh Hasina. It aspires to achieve development goals keeping good relations with all nations on a win-win basis - as envisioned by our Father of the Nation Bangabandhu Sheikh Mujibur Rahman when he declared friendship to all, malice to none to be the foreign policy dictum. These policy notions have contributed positively to securing an unprecedented strategic calm conducive for growth both externally and internally. Relationship with neighbours, especially with India is at its best. Other than recent issue of Rohingya, relationship with Myanmar was also not that depressing. Bangladesh always likes to avoid conflict situations; instead, chooses peaceful and diplomatic paths to resolve conflicting issues amicably.

But from a realist point of view, almost all nation-states of today maintain reasonable military capabilities or hard power just to avoid being viewed complacent or caught off-guard. As for Bangladesh, need for having appropriate military capabilities matching its growth trajectory cannot be over emphasized. Forces Goal 2030 was envisioned by the present government to render reasonably strong, modern and effective armed forces that is ready to meet wide ranging traditional and non-traditional security threats of today and the future. Our policy is to avoid conflict but remain adequately ready to face it if one is imposed on us. To this end, government has always been generous in military funding in spite of pressing demands elsewhere.

Readiness is as important as modernization of a force. During peacetime, Services (Army, Navy and Air Force) invest majority of time and resources preparing for the next war or conflict through rigorous training schemes including field training exercises. Besides Service-specific training regimes, cross-domain or Joint Warfare trainings are often undertaken simply because today’s warfare is unthinkable without jointness within three Services. Within the scope of Joint Warfare, one of the most appropriate events that involves all three Services is an Amphibious Landing – a joint operation that calls for an assault of land forces coming out of the sea using maritime power under the umbrella of air power. Normandy Landing of Allied Forces in 1944 was the largest seaborne invasion in history that led to capitulation of Hitler’s Germany during WW 2.

Bangladesh being a littoral state is blessed with so many islands along the coast, which need to be defended and recaptured, if lost to the adversary. Many of these islands provide excellent training opportunities for amphibious operations. In the past, some planning exercises on pen paper were conducted with token participation of forces on ground. The need for a large scale Field Training Exercise (FTX) involving actual combatants, ships and aircraft was felt strongly, especially in the wake of tensions in the South-eastern part of Bangladesh. To this end, government decided to hold a Joint or Tri-Service exercise called EXERCISE BOJRO AGHATH, which was conducted in February 2019 in and around Kutubdia Island off Chottogram Port. Imbibed with the spirit of our Liberation War of 1971, the exercise planned incorporating local populace and indigenous methods of warfighting from the beginning.

In case of any military exercise, a crisis scenario is painted with fictitious enemy. In this case, Kutubdia Island was shown as a territory already captured by a fictitious enemy which had to be recaptured through an amphibious assault. To accomplish this task, an Amphibious Task Force or ATF was created taking participants from all three Services. Every ATF needs a Landing Force (LF) which is conveyed by ships. In this case 10 Infantry Division of Bangladesh Army (BA) provided a brigade size force (65 Infantry Brigade) with tanks, guns and APCs etc as LF. Majority of the combat and support ships of Bangladesh Navy (BN) were deployed as maritime component. Some resources from commercial shipping were also incorporated in the fleet. Similarly, majority of the combat and utility aircraft of Bangladesh Air Force (BAF) were employed to ensure air support. Fictitious enemy also used actual troops, ships and aircraft to bring realism in the exercise albeit in a limited size.

Amphibious landing is already a very complex operation. Since such an exercise was taking place in large-scale for the first time, a lot of preparation, training and coordination meetings between participants were necessary. After careful study of hydrographic and tidal data, 26 Feb 2019 was selected as landing or D Day. However, due to bad weather, actual landing took place on 27 February. Preceding the landing, participants used days for planning and joint training. Infantry riding naval boats, air force helicopters trying to carry artillery pieces under-sling, and Special Forces of army and navy jumping out of air force helicopters were some of the many joint training events that took place during this week. Participants were excited by mere seeing and doing things together with participants from sister Services, which was happening for the first time for most of these men and women.

Winning a degree of control of air and adjoining sea areas is a precondition to any sea invasion. Two to three days of mock aerial and naval combats took place involving actual ships and aircraft within safety limits duly adjudicated by the neutral controllers of the exercise. Air Defence of ATF both at base and during transit through the sea is also important which was provided by air defence units of all three Services. Once all preconditions were met, the ATF got onboard vessels on 24 February for transportation to Kutubdia. Chottogram Port and adjoining areas were used for embarkation of troops and heavy equipment. To make ATF’s job further easy, the Special Forces including paratroopers, divers and local populace captured some dominating features inside the island, prepared the beach for landing and kept fictitious enemy busy. While this was happening, assaulting troops started offloading from ship into assault boats ready for landing.

At about midday on 27 February, waves of LF set off for two landing beaches in high speed assault boats under cover of BN and BAF firepower. Once ashore, a small area was captured first clearing enemy trenches and beach obstacles. This was the climax moment when one could see assaulting troops, boats, and aircrafts overhead - all coming together in the midst of smoke, loud noises of controlled explosion, battle cry of infantry soaked in aggressive spirit. This was the moment of truth, a moment that confirmed high level of professionalism of Bangladesh Armed Forces. And then, tanks, guns and APCs came ashore to join assaulting infantry. Once united with heavy armaments, infantry proceeded to capture more lands. At one stage, heliborne troops landed on the beaches of captured territories to reinforce troops already in the island. Throughout the operation, a tri-Service airspace management organization was working to coordinate and manage safe use of air space by aircraft of all three Services.

Logistics is part and parcel of any military operation. In case of amphibious landing, administrative matters become complex due to intermingling of participants from different Services. To ensure seamless logistic support to the participants, hospital ships, search and rescue helicopters, and salvage teams etc were used extensively. BA units used real estates of BN and BAF bases and relished their hospitality, especially while onboard ships. Military communications were standardized across Services after some common training sessions. They all spoke the same language and quickly became one entity, thanks to sound planning by commanders and staff officers. Local populace and resources were integrated as much as possible for both operational and logistical purposes.  For example, BA employed local populace as UCW forces. BN deployed civilian assault boats and AGI (Auxiliary, General Intelligence). Similarly, BAF used local spotters, weather office and other aviation related agencies for various aviation tasks.

In terms of organizing the exercise, Armed Forces Division or AFD played a pivotal role. However, without explicit support and sponsorship from Services HQs in general and Services Chiefs in particular, it would be impossible to conduct such a large - scale exercise. Many senior officials including Service Chiefs witnessed the landing with high appreciation. A large number of officers and men from all three Services worked as controllers, umpires and observers. NDC was heavily involved in this exercise planning and coordinating which was executed by three services. 24 Infantry Division, BNS ISSA KHAN and BAF BASE ZAHUR provided critical supports to exercising troops at Chottogram. With cooperation from all hands, EXERCISE BOJRO AGHATH was a grand success.

Finally, conduct of such an exercise provided some insights to the leadership in the Services. First of all, it was comforting to learn how quickly Armed Forces of Bangladesh can come together and accomplish any operational task with minimum preparation and training. This event once again reaffirmed the spirit of the Armed Forced Day, when freedom fighters from all three Services came together in 1971 to fight jointly against Pakistani occupation forces. In the process of doing this exercise, the participants also took note of their own strengths, weaknesses, shortcomings and challenges in terms of armaments, munitions, platforms and equipment. A set of recommendations are already with the Services HQ which are taken seriously for new procurements and standardization among Services. With the right kind of equipment, platforms and munitions at hand, Bangladesh would be ready to handle similar situation in reality, should it ever happen. Finally, EXERCISE BOJRO AGHATH has given huge confidence to leaders and combatants of Bangladesh Armed Forces and fostered bondage among Services. Ability to conduct such a large-scale exercise would surely bolster national image and raise the morale of members of Armed Forces in future also. As a minimum, display of such capabilities would, to some extent, act as deterrence to any potential adversaries and reassurance to the sovereignty of our beloved motherland, Bangladesh.