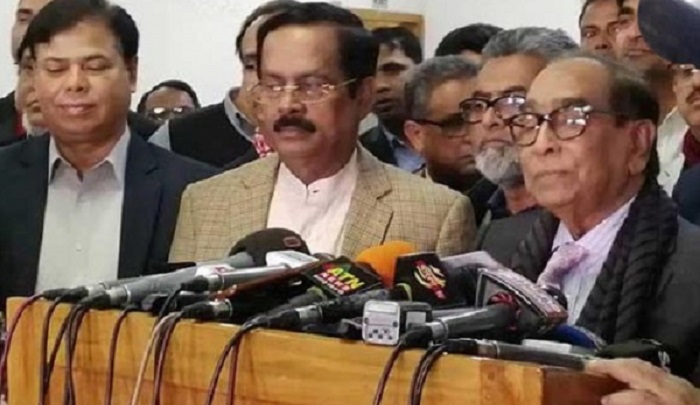 Awami League delegation chief HT Imam on Monday said BNP workers carried out the attack on AL men at the Gopibagh area on Sunday during the election campaign under an orchestrated plan to foil the upcoming Dhaka city polls.

The Co-Chairman of the National Election Conducting Committee of the ruling party told this to journalists after a meeting with the Chief Election Commissioner at his office at Agargaon Nirbachan Bhaban in the capital.

“Attacks were launched on our workers in a planned way. We came to the commission to submit the evidence,” he said.

Comparing BNP’s activities with a Bangla proverb “the mother of a thief is the loudest in denunciation”, HT Imam said Sunday’s attack incident at Gopibagh was designed by BNP and the party came to the EC and made allegations against the AL and the government.

HT Imam, also Prime Minister’s Political Affairs Adviser, said those who unleashed arson attacks during the period of 2014-15 have been brought to Dhaka and the BNP-Jamaat terrorists are hatching conspiracies to foil the polls.

“We submitted the information and evidence to the Election Commission about arms which were used in Sunday’s attack. Many of our workers got wounded. Those who received bullet injuries are now at hospitals,” he said.

Speaking to journalists, AL Presidium Member Jahangir Kabir Nanak demanded of immediate arrest of those attackers of BNP-Jammat to bring them to justice.