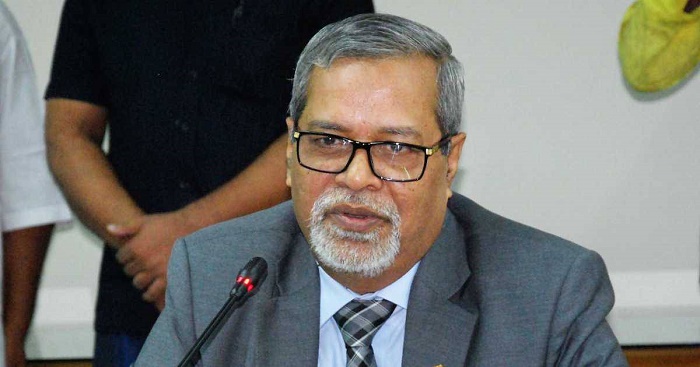 The CEC’s remarks came after the delegations of two political rival camps -- Awami League and BNP -- met him separately at his Nirbachan Bhaban office.

About the complaints placed by the two teams, the CEC said BNP complained that police are harassing their candidates. “But we (EC) saw no sign of such harassment. They (BNP delegation) said that police didn’t record their case over the Gopibagh incident. But I later talked to the officer-in-charge concerned who told me that no BNP activist turned up for filing any case,” he said.

When the BNP team told him that AL filed a case in this regard, the CEC said any aggrieved person can lodge a case if any criminal offence takes place. “It’s a legal matter.”

Talking about the complaints lodged by the AL delegation, he said it blamed BNP for Sunday’s incident.

The AL team said terrorist groups may enter Dhaka from different places outside the city and hamper the election process, Nurul Huda said, adding that it urged the EC to take measures in this regard.

Replying to a query, he said there is no apprehension of any deterioration in the law and order on the voting day.

Talking to reporters after the meeting with the CEC, HT Imam said BNP and Jamaat-Shibir cadres from outside Dhaka, being equipped with arms and weapons, took position at different points of the capital. “They might create a situation to foil the elections,” he claimed.

About the AL-BNP clash in Gopibagh, he said the allegation BNP brought about the incident is completely a ‘planned and designed’ one.

AL team member Jahangir Kabir Nanak demanded that arson terrorists of BNP and Jamaat-Shibir should be brought to book immediately.

Earlier, Amir Khosru told reporters at the Nirbachan Bhaban that though BNP candidates and supporters follow the electoral code of conduct, AL activists are not complying with it.

He also alleged that there is no level-playing field in the city elections.