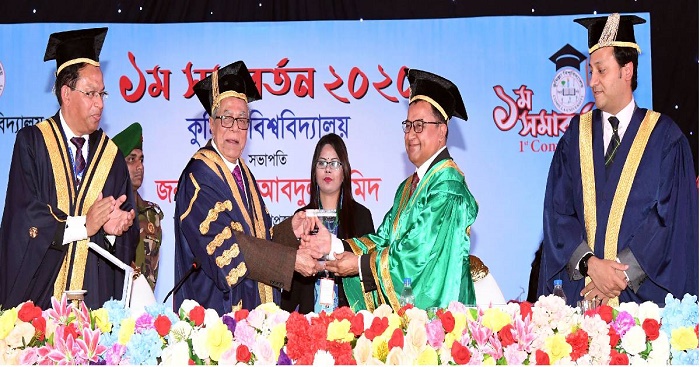 President Abdul Hamid on Monday asked all students to forge a strong social movement against drugs.

"Various drugs are easily available across the country. Cumilla is one of the routes for drugs to enter the country. Drugs have reached the hands of school, college and university students. So, students must avoid these,” he said while delivering his speech at the first-ever convocation of Cumilla University held on its premises.

Mentioning the names of several drugs, he said they had not even heard these names during their time. “Renowned personalities, intellectuals, journalists and public representatives should wage a social movement against drugs,” Abdul Hamid said.

Students will have to play the leading role in preventing drugs from the society and encouraging people so that no one takes drugs and run this trade in the country, he said. "You (students) will to have to start a silent revolution against drugs."

Asking students to remain alert about the matter, he said, "I’m earnestly requesting you to motivate other students as well as people. Or else, the entire country and the future generation will be destroyed."

The President also called upon universities to take initiatives for quality research alongside regular academic activities. "In addition to teaching, quality research should be undertaken so that teachers and students can utilise the resources and possibilities of Bangladesh to get involved in the country’s progress," he said.

Describing universities as a development centre of practising knowledge, free thinking and humane value, Abdul Hamid, also chancellor of the Cumilla University, said effective, relevant and practical activities should be introduced with priority to science and technology for the spread of the higher education alongside the general education.

He said graduates should be equipped with modern and technological knowledge to survive in this competitive era of technology.

He also said the present government has taken initiative to establish universities in almost every district. "I firmly believe this initiative will play a positive role in making Bangladesh a prosperous country by 2041."

The President asked the graduates to always uphold the truth and justice. You must prevent corruption and wrongdoings with morality and firmness," he said.

He also said university is a place of study and knowledge, not a place for ragging or earning money. "Parents have to do hard work and many lose everything to pay for your education. So, don’t bring danger to your family and society indulging in greed. Don't be disappointed with the ups and downs of life. Deal those with courage."

Altogether, 2,888 students were conferred upon graduation and post-graduation degrees and 14 of them awarded with gold medals.

The university was established in 2006 as the 26th public university of the country with seven functional departments.