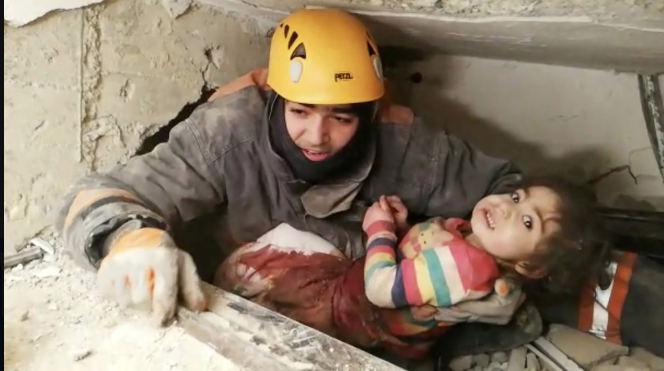 Turkish emergency teams drilled through the rubble Monday, searching for the last two missing quake victims believed trapped beneath a collapsed building after eastern Turkey was slammed by a powerful tremor.

The magnitude 6.8 earthquake that struck Friday night killed at least 39 people and injured more than 1,600 others, authorities said. At least 45 survivors have been pulled out of the rubble alive.

Rescue teams were working at a collapsed building in the eastern city of Elazig, trying to reach a missing 75-year-old woman and another person, as relatives waited patiently nearby, NTV television reported. It was not immediately clear if the missing two have survived.

The body of a third missing person was pulled out of the collapsed structure overnight, raising the death toll in the quake to 39, NTV reported.

The quake destroyed 76 buildings and damaged more than 1,000 others, forcing survivors to take refuge in tents, mosques, schools, sports halls and student dormitories. Authorities warned people not to return to homes that could be unsafe.

“We have so far lost a total of 39 citizens,” Interior Minister Suleyman Soylu, who has been overseeing the disaster management efforts, told reporters Monday, adding two of the victims had died of heart attacks.

Soylu said authorities were setting up insulated container homes to house up to 1,000 families left homeless by the quake. Work to construct some 2,000 permanent homes would begin in April, Turkey’s urbanization minister said.

Health Minister Fahrettin Koca said 86 people injured by the quake remained hospitalized on Monday, 18 of them in intensive care.

Over the weekend, rescuers pulled out Ayse Yildiz, 35, and her 2-year-old daughter Yusra from the rubble of another toppled apartment building in Elazig. They had been trapped for 28 hours.

Another couple who survived were reunited with a Syrian student who had helped to dig them out.

“He is our hero and angel,” a weeping Dudane Aydin said of Mahmud al Osman.

Her husband Zulkuf said the student went to extraordinary lengths to get them out, especially when his wife’s leg was trapped by debris. With other workers holding the student by his legs, he stretched toward the woman and freed her.

Turkey’s Emergency and Disaster Management Presidency said close to 4,000 workers and 22 dogs have been involved in the search-and-rescue operation.

Earthquakes are frequent in Turkey, which sits atop two major fault lines.

The city of Elazig has been hit by fatal quakes before — a magnitude 6.0 earthquake killed 51 people there in 2010.

Turkey’s worst quake in decades came in 1999, when a pair of strong earthquakes struck northwest Turkey, killing around 18,000 people.