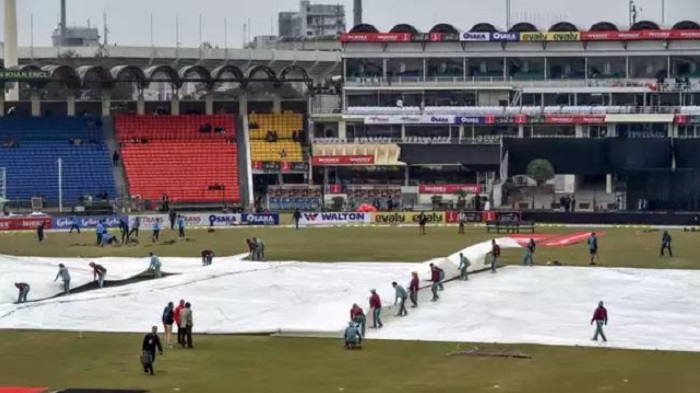 Rain played spoilsport to the third T20I between Pakistan and Bangladesh on Monday at the Gadaffi stadium in Lahore, with the match being washed out.

The hosts, who won the first two T20Is and as a result clinched the series, also retained their No. 1 ranking in the T20I format.

Persistent showers meant that the toss, which was scheduled for 2:30 pm (Bangladesh time), did not take place.

The covers were off at one stage but the respite was only brief as the showers returned. The cut-off time for a five-over contest was 4:30 pm (Pakistan time) but the rain did not relent, forcing the umpires to pull the plug on the game.

Pakistan rode on clinical bowling performances and strong shows from their experienced batsmen to win the first two T20Is. Shaheen Afridi bagged three wickets and conceded less than six an over. Shoaib Malik was the star with the bat in the opening game, with his unbeaten 58 helping Pakistan over the line. Babar Azam and Mohammad Hafeez struck fifties in the next game to see their side through.

For Bangladesh, the absence of key players in the batting department had a huge impact on their performances, with the batting order struggling to put up competitive totals. On wickets that weren't easy to bat on, Bangladesh struggled to rotate the strike and minimise the dot-ball percentage.

The T20I series completes the first leg of Bangladesh's three-phase tour of Pakistan. Bangladesh will return for the first Test which begins on February 7 while the final leg, which includes an one-off ODI and the second Test, starts in April.