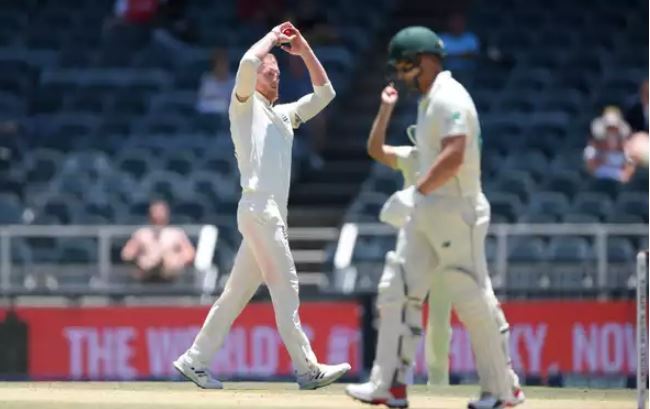 South Africa lost two wickets in the opening session on the fourth day as they went to Lunch at 90 for 2 in Johannesburg. Pieter Malan was the first casualty as he fell for a 51-ball 22 after making a steady start.

With a 466-run target ahead of them, South Africa needed to keep things boring. The leaves, the blocks and staying patient were on the agenda. And that's exactly what they did for the first hour in the day where they scored just 34 but more importantly saw off the new ball.

However, Malan lost his patience after the drinks break. Chris Woakes floated one outside off and the opener chased that delivery to be caught at slips. There was more drama from there on as Rassie van der Dussen survived two lbw calls.

In the 16th over, he was given out lbw as Woakes pinged him on the back pad. The ball, however, was going over off as van der Dussen successfully got the decision reversed. The very next ball, he was pinged on the pads again but this time an inside edge saved him. There wasn't much from there on as he took on Joe Root to collect a few quick runs.

Dean Elgar dug in for 73 deliveries and fell with less than five minutes left for the break. Ben Stokes banged one in and had the left-hander fending at the delivery. Elgar lobbed an easy catch back to the bowler to hand England the session.