Calls for 'virginity repair' surgery to be banned 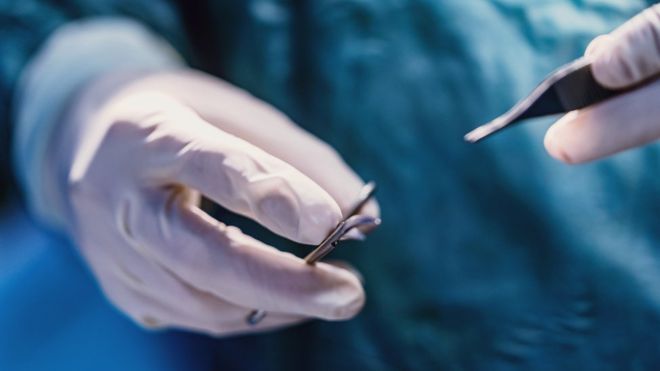 Campaigners are urging the government to outlaw "virginity repair" surgery.

Many Muslim women risk being outcast, or in extreme cases killed, if their spouses or families discover they have had sex before marriage.

And some are opting for a medical procedure in which doctors restore a layer of membrane at the entrance to the vagina.

But there are concerns a ban would increase the dangers to Muslim women by driving the procedure underground.Guidelines from the General Medical Council (GMC) state a patient's consent to undergo a procedure should come into question if it is suspected of being "given under pressure or duress exerted by another person".

Halaleh Taheri, founder of Middle Eastern Women and Society Organisation told BBC News of a Moroccan student in hiding in London after being told her father had hired someone to murder her.

But when her father had found out about their relationship, he had demanded she return to Morocco, where he had taken her to a clinic for a "virginity test" and discovered her hymen was no longer intact.

She fled back to London but now lives in constant fear her father will find out where she lived.

A Moroccan-born assistant teacher, 40, told the BBC that after being forced to go through with the procedure in her 20s, she could not imagine pressuring her children into doing the same.

"I would never, ever do such a thing to them. I try to teach them to be free."

There are currently at least 22 private clinics across the UK offering hymen-repair surgery.

They charge up to £3,000 for the surgery, which takes about an hour.

Women's rights campaigners say that such clinics are profiting from Muslims afraid of what could happen to them if they are not "pure" for their wedding night.

And many detail the procedure on their websites, with London's Gynae Centre telling women who visit its site "some marriages are even annulled" when a husband discovers his wife's hymen has been broken.

BBC News contacted the clinic for comment but has not received a response.

Health Secretary Matt Hancock said he would be investigating ways to end this "dreadful practice," but the Department of Health declined to comment on how a potential ban would be enforced.

But Miss Taheri said: "Girls could end up dying if banning this procedure isn't done with proper care."

Dr Khalid Khan, professor of Women's Health at Barts and the London School of Medicine, who has witnessed the procedure first hand, said a ban "isn't an appropriate response".

And as long as "good quality information" was made available to patients, the decision should be left up to individual women.

"I believe doctors' motives are genuinely for protection against abuse," he added.

However, Dr Naomi Crouch, who chairs the British Society for Paediatric and Adolescent Gynaecology, worries about women and girls being coerced into a procedure with "zero medical benefit".

"The duties of a doctor are made clear in standards set out by the GMC," she said.

"We as healthcare professions are bound by an oath to do no harm to patients and any reputable service engaging in these procedures is open to audit and scrutiny."

Colin Melville, medical director and director of education and standards at the GMC said that it's vital that doctors consider the "vulnerabilities and psychological needs of their patients" first.

"If a patient is under undue pressure from others to take a particular course, their consent may not be voluntary. If a doctor judges that a child or young person does not want a cosmetic intervention, it should not be performed," he said.

Other cosmetic genital procedures, such as labiaplasty, which involves the lips of the vagina being shortened or reshaped, have become increasingly popular, especially among younger women, from all types of background in the UK.

And campaigners say there is little known about the long-term effects of these procedures and are concerned women are not receiving enough psychological support before opting for surgery.

Miss Taheri said: "These women on some level don't see themselves as anything more than an object to be desired, rather a human being.

"For Muslim women, the drive is feelings of shame and the fear of punishment.

"For others, it is down to a lack of satisfaction with their own bodies, being fuelled by what society is telling them is normal."