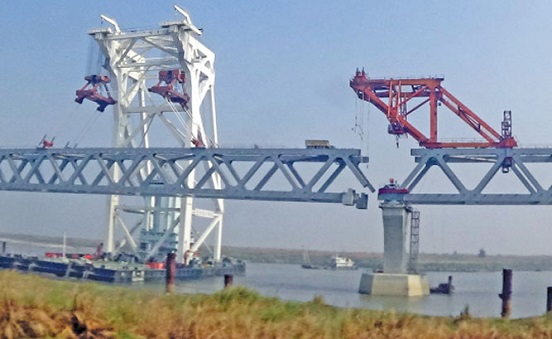 Prime Minister Sheikh Hasina has done a great job. The much anticipated Padma Bridge is going to be visible as 80 percent of the work has already been completed. Hasina filmed the bridge from a helicopter on January 24. She was on her way to Dhaka from Tungipara in Gopalganj. People of this region are not oblivious to the damages of bridges and culverts committed by Pakistani occupation soldiers during the Bangladesh Liberation War in 1971. But people of the liberated country have shown their might. The country, which is crisscrossed by rivers, has got new bridges. The socioeconomic and physical infrastructural development of this country during Awami League regime is globally acclaimed. Although the country benefits from the Meghna Bridge, it will enter a new horizon of economic development after Padma Bridge is completed.

I gathered a horrible experience by making a steamer journey from Dhaka to Khulna. A dragon-sized steamer was infested with passengers on the deck and other places. Some people were locked in brawl and scuffle in the canteen. People had to wait a day to cross the river as vehicles were in long queue stranded on both sides. As a journalist, I was subjected to a unique experience. Sufferings of the people made me shocked.

Since then Sheikh Hasina had been planning to construct a bridge on Padma River. A debate as to whether China or Malaysia should get the contract made headlines for some days. The Indian journalists are critical of the Narendra Modi’s activists. Bangladeshi journalists also show bold steps on the national issues.

The World Bank refused to fund the bridge raising a controversy over a scam conspiracy. The issue got wide coverage at home and abroad, putting Hasina in an awkward situation. She surmounted all impediments gradually. Later, an Indian daily published a news item saying the bridge would be constructed by China. Sources at Bangladesh rejected such claim. They said China will extend engineering and technological supports. At this stage, I would like to clarify one important issue. Taking loan by any country from the global lenders does not mean signing slavery bond. Indian government takes loan from IMF and later pays it back. It neither compromises with the country’s sovereignty nor becomes subservient to the lender.

Sheikh Hasina smelled rat behind withdrawal of funding by the World Bank. She vowed to get the bridge constructed without any financial support from any quarter. And her dream comes true. The Bangladesh government is constructing the bridge with funds from domestic sources.

A festive mood prevails in Bangladesh for two good occasions, one much headway in construction of Padma Bridge and the other preparations to celebrate birth centenary of Father of the Nation Bangabandhu Sheikh Mujibur Rahman. Global leaders including Indian Prime Minister Narendra Modi are set to attend the celebration.

The Bangabandhu Bridge over the Jamuna River was the largest bridge of Bangladesh for long. After completion, the Padma Bridge will be the largest one. It will connect the south-west of the country to northern and eastern regions.  A country is largely known for its infrastructural and architectural entities. France is branded by Eiffel Tower while Japan by bullet train. Modi has initiated bullet train under technical assistance of Japan. Bangladesh is going to be branded with the Padma Bridge in near future.

China is ahead of India in giving support for infrastructural development in other countries of the region. It is one of the characteristics of China’s neo-expansionism. Former national security adviser Shivshankar Menon once told me that India has some limitations as regards helping other countries develop infrastructure. During the term of Manmohan Singh, India faced obstacles to helping Bangladesh or other neighbours. Other ministries blocked the proposal on the plea that many Indian villages were yet to have concrete streets.

Although China and India are competing with each other to be close to Bangladesh, Sheikh Hasina remains in a balanced situation. She turned town China’s proposal to fund the Padma Bridge.

Her government does not entertain anything which is detrimental to the next-door neighbour. The Awami League government compelled Islamabad to take back its high commissioner for patronizing Jamaat leaders.

Rejection of funding offer by Sheikh Hasina has glorified the image of the country and its people. Besides, Padma Bridge will usher in Bangladesh’s new economic journey.

The writer is a senior journalist of  India