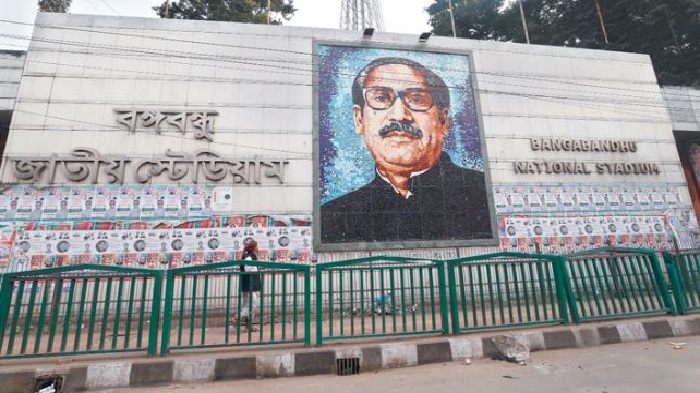 Numerous posters have been pasted on the mural of Bangabandhu Sheikh Mujibur Rahman beside the main entrance to Bangabandhu National Stadium in the capital, dishonouring the iconic leader . The photo was taken on Sunday. Photo: Kamrul Islam Ratan

Those, who made rules prohibiting putting up posters on the walls in the capital Dhaka to give it a clean look, have broken those rules themselves by pasting poll campaign leaflets on a mural of Father of the Nation Bangabandhu Sheikh Mujibur Rahman, dishonouring the country’s iconic leader.

The case in point is the mural of Bangabandhu Sheikh Mujibur Rahman at Bangabandhu National Stadium at Motijheel in the capital.

Supporters of mayoral and councilor candidates of the upcoming Dhaka city polls are defying the rules with utter disregard to Bangabandhu at a time when the nation is set to celebrate his birth centenary.

Bangabandhu National Stadium, formerly known as Dacca Stadium, is a multipurpose sports venue.  The stadium has been renamed after Bangabandhu (Friend of Bengal) in honour of the great leader.

At a time when Dhaka is being tastefully decorated to receive world leaders during the centenary celebrations, Bangabandhu’s mural has been covered with poll campaign posters, bringing shame to the nation.

This is not the first instance that any important place has been covered with electoral posters despite laws against such practices.

The Election Commission and other authorities concerned must stay cautious so that nobody can disregard the great leader with such practice.

They should also take stern action against those involved in such practice.