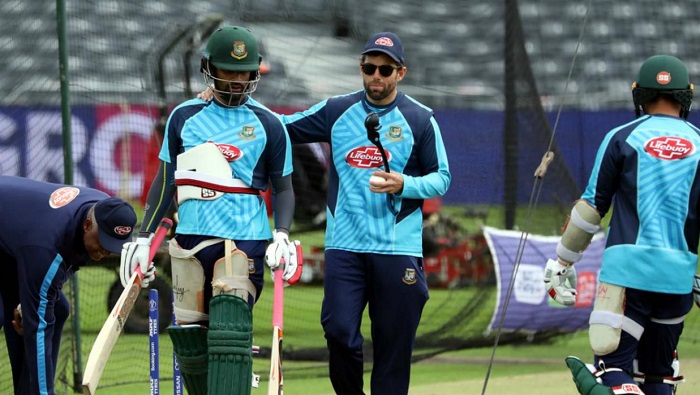 The lack of intent on the part of the Bangladesh batsmen in the first two T20Is against Pakistan has come as a disappointment for batting coach Neil McKenzie, who stressed on the need to rotate the strike and minimise the dot ball percentage.

Bangladesh could only manage totals of 141 and 136 in the first two games of the three-match series, playing out 45 and 47 dot balls respectively in the two matches that they lost to concede the series.

"You got to know your game, rotate the strike and then go with your boundary options," said McKenzie, who is currently in Bangladesh working with the Test squad. "There's a lot of inexperience in the squad at the moment. We knew that was going to be the case before we got there, but still it is disappointing. I think we missed out on a good start the other day (in the first T20I). What's been disappointing for me has been the intent. We have been working so hard in the last couple of years on rotation of strike, putting the bowlers under pressure, where you are standing, making him bowl to where you want him to bowl. But I haven't seen too much of those in the last T20s."

McKenzie pointed out that the mentality of the Bangladesh batsmen needs to change. He feels that during his stint with the Bangladesh setup so far he has come across batsmen who are just happy to get to a decent score to cement a spot for the next game instead and that he hasn't seen anyone "jumping out of the box".

"A lot of the time guys are happy to play the next game. If you get 40 or 60, you are happy to play the next game. And that's the wrong mentality. I want guys to try and be the best in the world instead of trying to be the best Bangladesh batsmen that have been around and I think that's what we are trying to install. Yes, there is improvement and the turnover of players is a little bit too high for my liking. There has been a lot of players that we have seen throughout my tenure here. It just looks like no one is jumping out of the box. We are making progress but it has been a little bit frustrating."

Meanwhile, McKenzie came to the defence of Tamim Iqbal despite the opener not scoring at a rate he's capable of. With strike rates of 114.71 and 122.64, Tamim hasn't set the stage alight since his return, with series against Pakistan being the left-hander's first international appearance since July 2019.

"I think you have to cut him a little bit of slack. He has been one of Bangladesh's best performers through the years. He is coming back from an injury and a few other things, so he is settling in. I think the positive thing for him is his runs under the belt. We all know what he can do, what he is capable of. You saw how he took it in the BPL final last year. I think we all want him to play more innings like that. He is probably one of Bangladesh's most consistent players.

"We know how he can play but it's also up to him to trust the guys around him. But the guys around him also have to be performing. When you have faith in the team and batting order, you can play a few more shots. I am glad to see him back. It seems he is in a good frame of mind. Hopefully, it is the confidence he needs to kick-start and get him going, and turn those sixties into an eighty off 55 balls. He is an experienced player. He knows what he should be doing and how important he is for Bangladesh. It is a process, but we are looking for a little bit more fearless batting," McKenzie said.