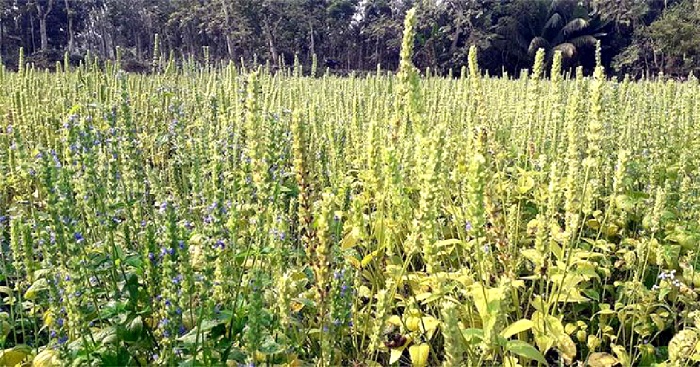 At a time when losses are forcing many farmers to turn to cash crops, a farmer has found hope in Chia cultivation in Manirampur upazila of Jashore – with a little help from his agriculturist brother.

Highly nutritious Chia seed shares similarities with sesame seed and the farming system is quite identical. It is mainly cultivated in Canada, Australia, Japan, America, Chili, Mexico, and New Zeeland, among other developed countries.

Hafizur Rahman, a local farmer, cultivated Chia on 50 decimals of land this season under the direct supervision of his elder brother agriculturalist Dr Md Mashiur Rahman, a professor at the Bangladesh Agricultural University.

Dr Rahman collected seed from Canada in 2016 and later led an experimental cultivation.

He told UNB that he became interested in Chia farming in Bangladesh after learning about its nutritional quality, and examined local soil and climate to see if it is suitable for Chia cultivation.

“After months of research, I started experimental Chia cultivation and succeeded in 2017,” he said, adding that he encouraged his brother to start cultivating Chia.

Chia plants look like sesame but its nutritional quality is higher than many crops and it is very expensive.

Hafizur said Chia seed can be sown in the Bengali month of Karthik and Agrahayan. “I’ll harvest the crop within a few days,” he said.

Only 200 grams of seed are enough for each Bigha, he said, adding that Chia plant requires one or two irrigations and requires less insecticide due to less pest attack rate.

Farmers should use a little amount of Urea, TSP and MOP fertilisers 15-20 days before sowing Chia seed in the field, he added.

Each kilogram of Chia seed costs about Tk 2,700 in Dhaka’s market.

It turns into jelly when the seeds are put in water. This jelly can be eaten with bread, pudding, cake and loaf.

Hirok Kumar Sarkar, the Upazila Agriculture Officer, said they will encourage local farmers to cultivate Chia in the next season.