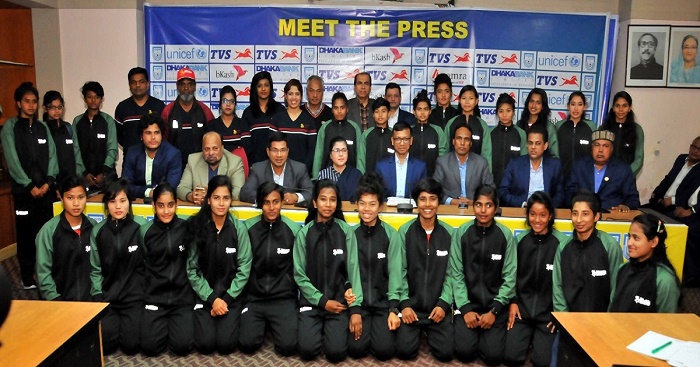 Bashundhara Kings has formed a strong team for the 3rd edition of the Women’s Football League recruiting 23 booters, including 19 national players.

They together with other teams completed their player registration formalities for the upcoming meet at Bangladesh Football Federation (BFF) office on the last day on Sunday.

The first edition of the women’s football league was held in 2011 where Sheikh Jamal DC clinched the title beating Dhaka Mohammedan.

After a long break of seven years, BFF is finally going to hold the league this year, but the traditional and big clubs like Dhaka Mohammedan, Dhaka Abahani and Sheikh Jamal DC are not taking part in the league this time.

On completion of the player registration formalities, Bashundhara Kings President Imrul Hasan said, “We’ve formed a strong team incorporating 19 national booters. The club has initially signed a one-year contract with them [booters]. The prominent clubs are not taking part in the league, so we got the chance to include the famed booters in our team.”

“Among Bangladesh Premier League (BPL) Football teams, only we’re taking part in the women’s football league. Unfortunately, big clubs are not participating in meet this year. But, the good thing is that some new clubs have stepped forward,” he said.

About their target, Imrul said, “First, we want to be the champions in the league, and then our aim will be to take part in the AFC women’s competition. I’m not sure about the criteria of taking part in the AFC meet. But if we get the chance, we’ll obviously take part there. We have a plan to recruit some foreign players for the AFC competitions.”

Bangladesh National Women’s team Captain Sabina Khatun said, “Finally, we’re taking part in the league. Bashundhara Kings wants to work for developing women’s football. Our aim is to be the champions in the league.”

The double-leg basis league will be held at the Bir Sherestha Shaheed Shipahi Mostafa Kamal Stadium in Kamalapur.