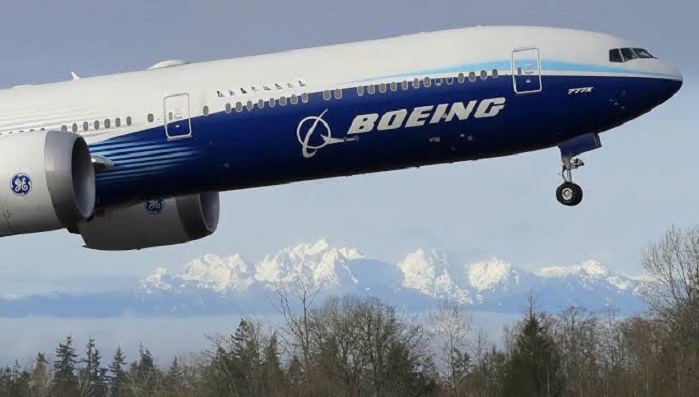 Boeing's new long-haul 777X airliner made its first flight Saturday, a major step forward for the company whose broader prospects remain clouded by the 737 MAX crisis.

The plane took off from a rain-slicked runway a few minutes after 10:00 am local time (1800 GMT), at Paine Field in Everett, Washington, home to Boeing's manufacturing site in the northwestern United States.

Weather conditions had already twice delayed the inaugural takeoff of the plane, which sports blue and white company colors and is emblazoned with the Boeing name.

High winds led to its postponement on Friday, and the company blamed weather for an earlier delay on Thursday, which was rainy.

The 777X originally was due to take to the skies for the first time in mid-2019, but was postponed due to problems with the new engine, manufactured by General Electric, and difficulties with the wings and software.

If the test flights go well, Boeing will officially file for approval from the Federal Aviation Administration (FAA).

As Boeing faces a crisis over its top-selling 737 MAX following two deadly crashes, the 777X is supposed to compete in the market for long-haul aircraft with the A350 made by rival European aircraft manufacturer Airbus.

Some 340 orders of the 777X have been made mainly from seven major airlines, including Emirates, Lufthansa, Cathay Pacific, Singapore Airlines and Qatar Airways.

The first deliveries of the new model, which can carry 384 to 426 passengers, are not expected before early 2021, instead of mid-2020 as initially planned.

The aircraft encountered significant problems during pressurization tests in September.

Boeing's position in this segment has been weakened by the lack of firm orders from China for its 787 "Dreamliner," which is expected to see production cuts.

US air safety regulators could clear the Boeing 737 MAX to return to service before mid-year, a person close to the process said Friday.

The plane has been grounded since March following two deadly crashes, in Ethiopia and Indonesia. On Tuesday, Boeing announced that it did not expect to win regulatory approval until mid-2020.

Boeing suspended production on the MAX this month but Chief Executive David Calhoun said this week the company plans to begin ramping up 737 MAX production ahead of winning regulatory approval to resume service on the plane.

Calhoun began as CEO earlier in January. He has highlighted restoring Boeing's reputation with regulators, customers and other stakeholders as an imperative as he tries to the turn the company around.