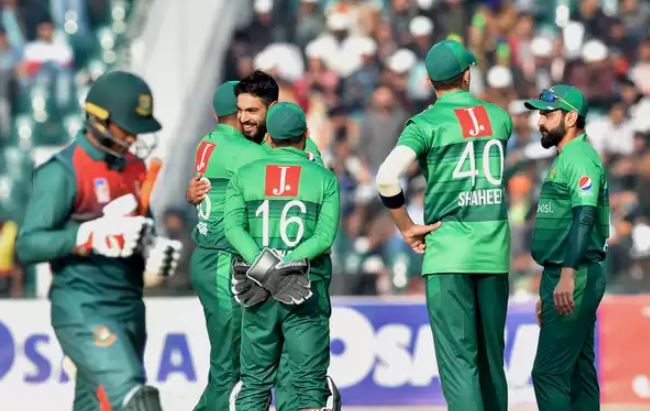 Bangladesh head coach Russell Domingo said on Saturday that they were short by 15 and 25 runs respectively in the opening two T20Is against Pakistan but admitted that there is a huge gap between them and the hosts, with respect to skill and experience.

Pakistan clinched the three-match series with one game in hand as they asserted their dominance over the tourists by beating them comfortably, especially in the second T20.

While the visitors managed to put some kind of pressure in the opening game, it was a completely different story in the series-deciding second fixture as the hosts humiliated their opponent by earning a massive nine-wicket win that clearly showed why they are currently the top-ranked team in the shortest format.

''It was disappointing today. I thought we challenged them much more in the first game. Not an easy wicket to bat on and average score on this field is 155 or so. In the first game we were about 15 runs short may be and today 25 runs short,'' Domingo told reporters after losing the series at the post match press conference in Lahore on Saturday.

''But then again that's why they rank number one and we rank number nine. At the moment there is a big difference between the two teams in terms of experience and skill. We have got a long way to go to catch up to them,'' he said.

Russell added that the pacers from the opponent camp seemed just too hot to handle and that it was good learning experience for the young members of the national team.

Bangladesh are playing without Shakib Al Hasan, due to his ICC ban, while Mushfiqur Rahim withdrew from the tour of Pakistan due to personal reasons. The hosts are also missing the services of young all-round prodigy Mohammad Saifuddin, who is nursing a back injury.

''We are probably missing three of our first choice players in Saifuddin with the new ball and batting at number eight. Shakib is not there, you think of Mushfiqur but it is a great opportunity for these younger players. You have to try and test the depth because those players are not going to be there forever,'' said Russell.

''Today in the batting line-up we had Naim who is playing his fifth T20I, Afif I think might have played nine or ten. Mehidy batted at three playing his second. So a very inexperienced line-up but hopefully they will be better going forward as they have faced a quality attack on a tough wicket and hope they have learned some lessons from it,'' he said, adding that they decided to bat on both occasion because they were reluctant to chase largely due to an inexperienced batting line-up.

''If you look at their record they are probably a fantastic side defending their scores. With an inexperienced batting lineup and them trying to squeeze us in the second innings have not worked for us,'' he said.

Russell said that he is happy with the way Tamim Iqbal went about his business but added that he will be looking forward to seeing how the experienced campaigner can take his game to the next level.

"This is my first tour with Tamim and I thought he has played well in both innings. Sure there is improvement that he can make in his game. First game we were about 68 without loss and we were okay. Today we just kept losing wickets at the wrong time. Lost wickets in the second over, lost wickets in the fourth over, lost wickets in the eighth over. So it is difficult for him to open up his game because the batters he is batting with are also going at a run a ball,'' Russell said of Tamim's batting method, who returned to the national team after missing the last two series due to mental fatigue and being with his wife who was expected to deliver during the tour of India.

Russell added that moving down Soumya Sarkar at seven was a tactical move as they were trying to see whether he can come up with some blazing knock at the death for them.

''Soumya had lots of opportunities to bat up the order and I think he is a fantastic player. We are trying to find guys who can hit the ball out of the ground at the back end of the innings which Bangladesh always seem to be short of. Some power hitters at the back end. So we are just trying one or two things,'' Russell said, adding that they are looking for different options with an eye on getting a good idea about who fits where in the shortest format and what is likely to be their best possible playing eleven heading towards this year's T20 World Cup.

''Looking at different combinations, looking if they can work on those roles. A guy like Soumya is a fantastic batter and we wanted to see if he can bat in the back end of the innings,'' he said, adding that now the three cricketers - Nazmul Hossain Shanto, Rubel Hossain and uncapped Hasan Mahmud will have an opportunity in the last game to showcase their talent against the highly competitive hosts.

''I need to give everyone the opportunity. We are 2 nil down in the series. There are three boys that have not played and they will definitely come in and we can look at few more options,'' he concluded.