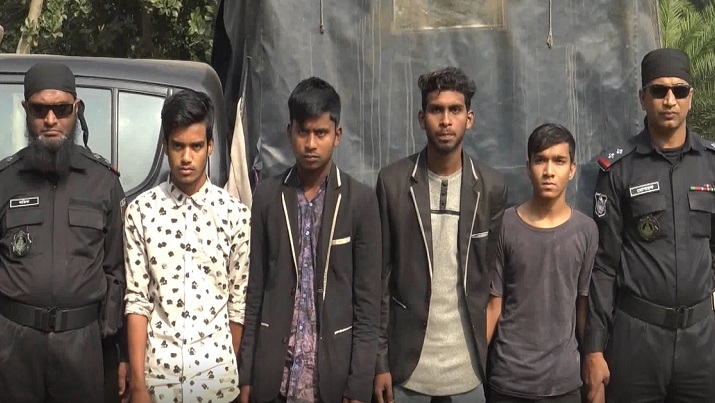 Members of Rapid Action Battalion (Rab) have arrested four people for allegedly gang-raping a teenage girl at a birthday party at Nayanpur of Sreepur upazila.

Three of the arrestees were identified as Sharif Hossain, 18, Imran Hasan Sujan, 19, and Sharif Uddin Mollah, 20, while the other suspect is a teenage boy aged 16.

She was given food laced with sedatives and the four took turns to rape her, he said.

It came to the fore after a video clip went viral on Facebook where the suspects were seen saying, ‘Hello friends, we might be inside jail tomorrow. So, there’s a little chance to meet you again.’

The victim’s mother filed a case over the incident with Sreepur Police Incident on January 16 and sought Rab’s help in this regard.

Acting on tip-off, a Rab team conducted a drive at Rajbari of Gazipur city around 10:30pm on Friday and arrested FIR-named accused Sharif Hossain, Mamun said.

On information gleaned from him, the elite force later arrested three others from different places of Mymensingh in the early hours of Saturday, he added.

During primary interrogation, the four youths confessed to their crime. They said they took the girl to the birthday party to a house at Nayanpur and made her unconscious feeding her drinks laced with sedatives.

At one stage, they took her to a bush and raped her in turns.

Of the culprits, Imran recorded the incident on his mobile phone and later circulated it on Facebook, the Rab official said.