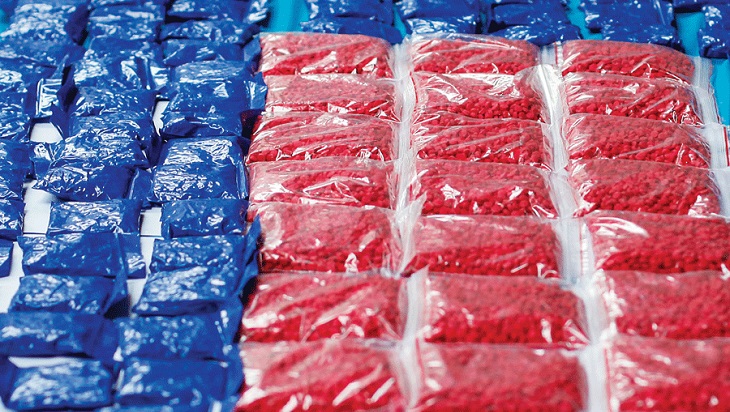 Despite the massive anti-drug crackdown by law enforcement agencies, illegal drug trade continues at most of the bus and launch terminals, railway stations, sweeper colony, non-Bangalee camps, and even lanes and bylanes in the capital.

The sale of all kinds of narcotic drugs like yaba, heroin and phensidyl goes on at about 374 spots in Dhaka city, according to intelligence sources.

On Thursday, members of Rapid Action Battalion (RAB-1) in separate drives detained three drug peddlers with 1,672 bottles of Phensidyl in Hazrat Shajalal International Airport and other areas at Uttara in the capital.

The identities of the detainees couldn’t be known immediately.

RAB-1 seized two trucks used in the smuggling of the drugs by the detainees during the drives.

Over 400  listed drug dealers have been killed, out of which over 50 from Teknaf in Cox’s bazaar in separate gunfights with law enforcers during the countrywide massive anti-narcotic crackdown since May in 2018. At the same time, over one lakh was also arrested.

Despite of intensifying surveillance in border areas, smuggling of yaba and phensidyl into the country is still rampant through different land and water ways of the Bay of Bengal touching bordering points in Cox’s bazar from neighbouring Myanmar and other land points in India, detective sources said.

Evading the eyes of law enforcers including Border Guard of Bangladesh (BGB), such dangerous drug items are entering into the country including in the capital through its different bordering points every day.

While visiting, the BGB DG told the journalists that BGB has taken all-out measures to check the inflow of all smuggled items including yaba and phensidyl into the country. “Our forces are closely monitoring the country’s 4427 kilometre boundaries including 243 kilometre water boundary.

For this strict surveillance on the bordering points across the country, smuggling of human trafficking, drug like yaba and phensidyl have remarkably decreased, the BGB chief added.

Only field-level drug carriers with drug items including yaba are being caught by law enforcers at times, but in most of the cases, their godfathers hobnobbing with a section of dishonest policemen are remaining almost behind the scene, detective sources said.

In the wake of the countrywide massive anti-narcotics crackdown by law enforcers, such dreaded drug smugglers of Cox’s bazaar and elsewhere in the country went into hiding.

Deputy Commissioner (media), DMP, Masudur Rahman said a number of drug traders are regularly being arrested with drug items from different parts of the capital.

They are also being awarded various terms of imprisonment on charges of carrying drug. But most of them again get involved in the same business after coming out of jail on bail, he added.

Drug addicts, mostly youngsters including both male and female gather at different drug sale points from afternoon till mid-night.

Despite law enforcers’ routine and special raids, the drug trade situation virtually keeps unchanged as most of the arrested drug dealers resume their businesses after securing bails from courts.

According to the court sources, the arrested drug paddlers come out of jail due to loopholes in police reports produced in connection with the cases.

Department of Narcotics Control sources said the drugs seized amounts to only 10 percent of the total drugs being smuggled into the country.

Some one-lakh people are engaged in this illegal drug trade and 30 percent of those arrested on charges of drug peddling are women and children, added the sources.

Intelligence sources said most of the drugs, being sold in the drug dens, include heroin, yaba, cannabis, and phensidyl.

The highest number of illegal drug spots has been identified in Jatrabari, Demra, Shyampur and Kadamtoli where 93 drug dens have been spotted.

Another 72 drug dens have been found in Dhanmondi, Hazaribagh, and New Market while 49 others are being run in Pallabi.

Sources said seven points have been spotted in Ramna, 14 in Motijheel and Paltan, 12 in Lalbagh and Kamrangichar, 10 in Kotwali, seven in Sutrapur, 11 in Sabujbagh and Khilgaon, 20 in Gulshan, Badda, Khilkhet and Cantonment, six in Mohammadpur and Adabar, 10 in Mirpur, Shah Ali and Darus Salam, 22 in Uttara, Torag, Uttar Khan and Dakhin Khan, 15 in Biman Bandar and 20 drug points in Shahbagh.

One of the most wanted “top terror” Trimoti Suvrata Bain, who is believed to be hiding in India, controls the drug den in Ramna.

Over 17 drug peddlers have been identified in Tejgaon who run the illegal trade in Karwan Bazar road, rail line slums and others areas. Most of the drugs, especially phensidyle and cannabis, are being ferried there by trains.