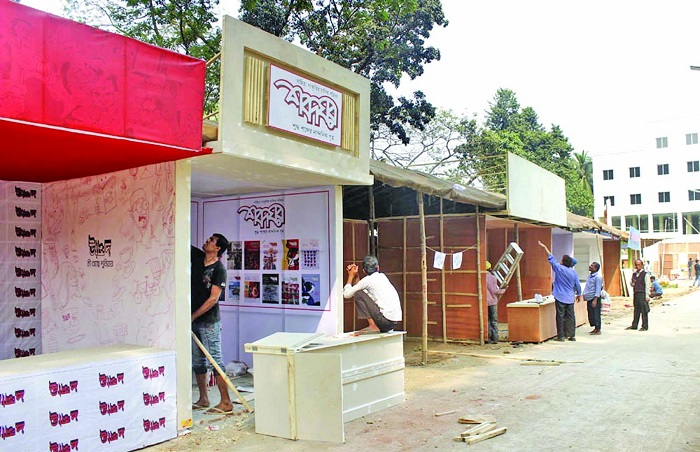 Preparations for holding the annual Amar Ekushey book fair, the largest and most popular book fair in the country, on the Bangla Academy premises and the adjacent areas are going on in full swing.

This year, the fair is being arranged covering larger areas, aiming to accommodate more publishing houses and booklovers.

The fair is set to begin on February 2 instead of February 1 due to elections to two Dhaka city corporations.

The month-long book fair is arranged every year in February commemorating the sacrifices of eight people who laid down their lives on February 21, 1952 for establishing Bangla as the mother tongue.

Salam, Barkat, Rafiq, Jabbar and a few other brave sons of the soil were killed in police firings on the day when students came out in a procession from Dhaka University campus defying section 144 to press home their demand for the recognition of Bangla as a state language of the then Pakistan.

Prime Minister Sheikh Hasina will inaugurate the event on the first day of the fair on the premises of Bangla Academy. The Bangla Academy Literature Award will also be distributed at the opening ceremony.

Visiting the fair venues, the UNB correspondent found workers busy preparing and designing their stalls on the Bangla Academy premises and in the extended part of the fair at Suhrawardy Udyan.

The correspondent found that the publishing companies who got allotment have already started setting up stalls.

Workers were found busy in installation of pavilions and stalls to complete those within the deadline set on January 30 noon.

Besides, the printing presses in the capital’s Bangla Bazar and Paltan areas are now abuzz with the last moment tasks of printing and binding new books.

Bangla Academy director and member secretary of the fair organising committee Jalal Ahmed told UNB that they are well-prepared to hold the fair smoothly.

"We’ve completed our all the formalities of the fair successfully. We’ve allotted the stalls earlier which will help the publishers install their stalls properly. The number of units has been increased while the fairground expanded," he said.

Jalal said the fair will be dedicated to Father of Nation Bangabandhu Sheikh Mujibir Rahman while his life and works will be showcased in the fair in different ways marking his birth centenary.

He also said a total of 830 units have been allocated to 550 publishers on January 13.

The fair venue was first extended to Suhrawardy Udyan in 2013 to accommodate more participants.

He also added that 34 pavilions have been allotted to publishing houses, including the Bangla Academy. The total number of the pavilions was 24 last year.

Writers and publishers are also busy promoting their books on the social media ahead of the grand fair.

Publishers expressed their satisfaction to reporters as the academy allotted stalls for them on January 13, much earlier than the previous year.

He also said the Academy has set the theme of the fair as ‘Birth Centenary of Bangabandhu.’