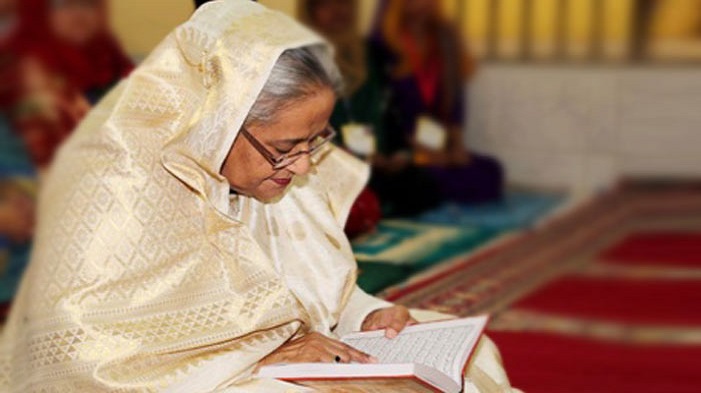 Prime Minister Sheikh Hasina on Friday recited some verses from the holy Quran sitting beside the mazar (shrine) of her father Sheikh Mujibur Rahmanin in Tungipara of Gopalganj.

Earlier, the prime minister arrived around 11:00 am in Tungipara, the ancestral home of the Father of the Nation Bangabandhu Sheikh Mujibur Rahmanin, by an Air Force helicopter.

After the arrival, she recited holy Quran and offered Fateha and munajat seeking salvation of the departed soul of Bangabandhu.

Later, the newly-elected Bangladesh Awami League (AL) Central Working Committee and Advisory Council led by her paid rich tributes to the Father of the Nation.

They paid the homage by placing wreaths at the mazar of Bangabandhu, the greatest Bangalee of all times.

Prime Minister and AL President Sheikh Hasina first laid a wreath at the mazar of Bangabandhu.

After placing the wreath, she stood there in solemn silence for some time as a mark of profound respect to the memory of Bangabandhu Sheikh Mujibur Rahman, the architect of the country’s independence.

They offered Fateha and joined a munajat seeking eternal peace of the departed soul of Bangabandhu.

Secretaries concerned and special assistants to the prime minister were present on the occasion.

The premier left Tungipara for Dhaka at around 3:00 pm.

Sheikh Hasina was reelected as the president of Bangladesh Awami League, one of the oldest political parties in the subcontinent for the ninth consecutive term, while Obaidul Quader was reelected as the general secretary for the second straight time in the AL’s 21st National Council held on December 20-21 last.