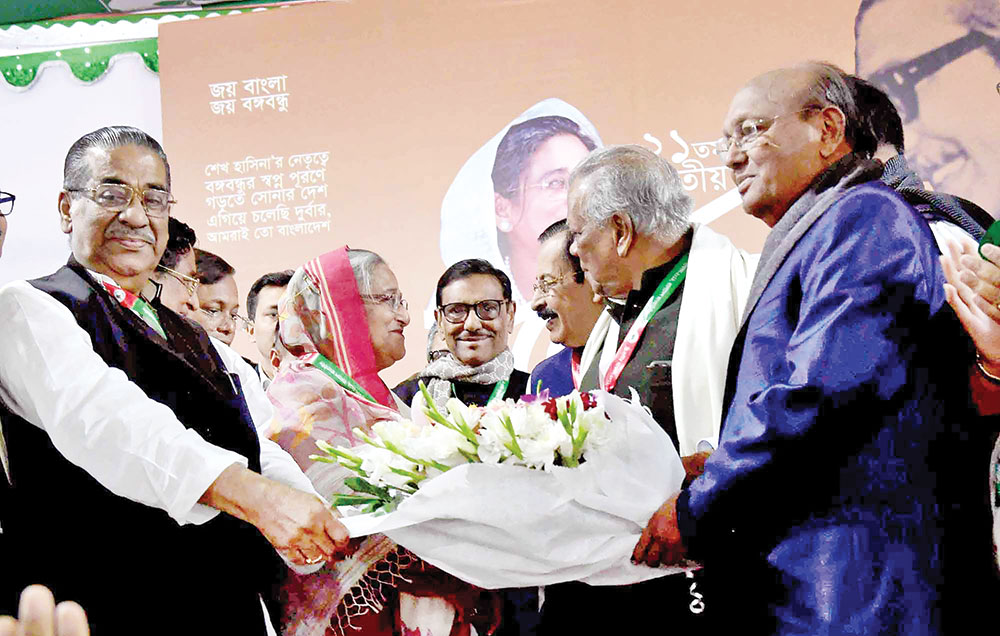 The newly-elected Bangladesh Awami League Central Working Committee (ALCWC) and Advisory Council led by AL President and Prime Minister Sheikh Hasina would pay tributes to Father of the Nation Bangabandhu Sheikh Mujibur Rahman by placing wreaths at his mazar in Tungipara of Gopalganj on Friday.

The members of the ALCWC and Advisory Council will also offer fateha and join a doa mahfil seeking eternal peace of the departed soul of the Father of the Nation.

The AL leaders left Dhaka for Tungipara on the premises of Jatiya Sangsad Bhaban in the capital at 7:00 am today.

As the Prime Minister, Sheikh Hasina will pay homage at first to Father of the Nation Bangabandhu Sheikh Mujibur Rahman by placing a wreath at his Mazar (shrine).

Later, Sheikh Hasina along with members of the Central Working Committee and Advisory Council of the party will pay tributes to the greatest Bangalee of all times Bangabandhu Sheikh Mujibur Rahman.

Sheikh Hasina will offer Fateha and join a munajat seeking eternal peace of the departed soul of Bangabandhu.

A joint-meeting of the newly-elected Awami League Central working Committee (ALCWC) and Advisory Council will be held there as per the tradition.

The prime minister will leave Dhaka for Tungipara by a helicopter on Friday at 10am, according to a letter signed by Prime Minister's Protocol Officer-1 SM Khurshid-Ul-Alam that was sent to Gopalganj Deputy Commissioner (DC).

The premier will leave Tungipara for Dhaka at 2.20pm.