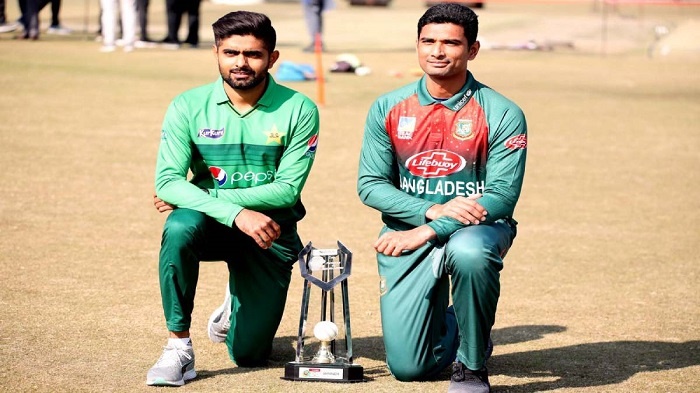 Many things were happening about Bangladesh-Pakistan series in the soil of Pakistan. But now, keeping everything aside, the cricket is finally set to take the field when the Tigers will face off the hosts on Friday in the first T20 of the three-match series in Lahore.

The match will start at 3pm (Bangladesh time) at the Gaddafi Stadium in Lahore. The official broadcast partner of Bangladesh Cricket Board (BCB), Gtv, will telecast the game live in Bangladesh. At the same time, the match will be live on YouTube through an official channel.

Before this series, Bangladesh and Pakistan faced each other in 10 T20 Internationals, in which, Pakistan won eight and Bangladesh managed to win the other two.

In the pre-series press conference, Bangladesh captain Mahmudullah Riyad told the media that they are eager to play cricket and forget the other things that were talked much. Tigers have to stay in Pakistan in a tight-secured environment which is not usual for them. Mahmudullah said  that this will not impact their game.

“We are concentrating only on our game. We have nothing to worry about the security arrangement or anything like that. We understand that Pakistan is a big force in T20 Internationals. Despite that, we upbeat to offer a strong show in the field,” Mahmudullah told the media in the pre-series press conference at the venue.

Bangladesh are going to miss the service of two veterans Shakib Al Hasan and Mushfiqur Rahim. While Shakib is out of action due to a two-year ban imposed by the ICC, Mushfiqur skipped the Pakistan series due to the concern of his family about security. Mahmudullah reckons it will be tough for Bangladesh to come up with the replacements of the duo. But he said the young guys who made it to the national squad are capable enough to deliver good performances.

“Yes, they are not here. But (we are not worried, because of) the young players who have proved their worth in the just-concluded Bangabandhu BPL. They are keen to bring their strong show at the international level as well. If you talk about the experience, we have Tamim (Iqbal), Shafiul (Islam), Al-Amin (Hossain), Soumya (Sarkar) and Mustafizur (Rahman) who have been playing together for a long time. So we are not worried about who are not here. Instead, we are looking forward to performing well in the field,” Bangladesh captain added.

Bangladesh head coach Russell Domingo earlier said that this series will be the start of his preparation to sort out the squad for the T20 World Cup this year which will take place in Australia. Mahmudullah echoed his coach in the pre-series media interaction.

“It’s a big opportunity for us to sort out our team ahead of the  T20 World Cup. We have to make habit to win the T20 matches. At the same time, it’s a big chance for all of us to win a series in Pakistan,” Mahmudullah told the media.

Wahab Riaz and Mohammad Amir could have been the big threats if they were in the Pakistan squad. However, Mahmudullah said they are not heeding much on the opposition. Instead, they are thinking to execute their plan in the field.

Bangladesh team reached Lahore at 10:30pm (Local time) on January 22. Tigers went to Pakistan through a chartered flight of Biman Bangladesh Airlines since there is no direct flight to Pakistan from Bangladesh.

After reaching there, Tigers were welcomed by the government and Pakistan Cricket Board (PCB) officials. Mahmudullah and his team are staying at Pearl-Continental Hotels.

While the first match of the series will take place on Friday, the next two games will be played on January 25 and 27 at the same venue. After that, Tigers will back home and return to Pakistan two times more to play two Tests and one ODI.