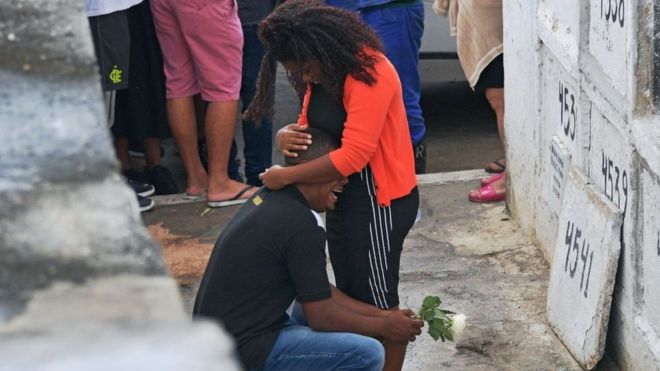 Police killed 1,810 people, an average of five per day, the highest number since official records began in 1998.

Critics blame the rise on policies that include the use of heavily armed agents and helicopter-borne snipers to fight criminals in densely populated areas.

But officials say the approach has worked, citing a drop in violent crime.

Rio de Janeiro is one of Brazil's most violent states and vast areas are under the control of criminals, many of them linked to powerful drug-trafficking gangs. But paramilitary groups formed by active and retired policemen, known as milícias, have also expanded their influence in recent years.

Police raids increased last year as Governor Wilson Witzel employed what critics describe as a policy of confrontation. A conservative former judge and marine, Mr Witzel took office in January 2019 after saying the authorities would "dig graves" to bury criminals if necessary and vowing to "slaughter" any armed suspect.

The total of police killings recorded last year represents an 18% increase on the previous year, according to Rio de Janeiro's state government.

While officials say most of the victims were gunmen who died in confrontations with police, there are suspicions that some cases were extrajudicial killings. In others, innocent people were wrongfully targeted or died in the crossfire.

Meanwhile, the number of homicides in the state fell to 3,995, the lowest number since records began in 1991. The drop mirrors a trend seen across Brazil, where homicides fell more than 20% in the first nine months of last year, official data shows.

Experts say this is a result of a number of factors, including truce deals between rival criminal groups, the transfer of gang members to safer federal prisons, better state policing strategies and the improvement of Brazil's economy after years of crisis.

Mr Witzel - who has expressed a wish to run for the presidency of Brazil - celebrated the numbers on Twitter, saying his policies were "generating positive results month after month".

The record number of police killings would be alarming anywhere but Rio, where people have become used to such violence. It takes tragedies like a jiu-jitsu coach shot dead outside his social project, or an eight-year-old girl killed inside a van while travelling with her mother, to spark some commotion.

As the black and the poorest are usually the victims, there is very limited public criticism - and the cases are rarely fully investigated. When I was in Rio last year, many outside the poorest areas told me this was the price to be paid in an effort to fight unacceptably high levels of crime.

But a recent study by the Rio prosecutor's office said there was no link between a more lethal police and the fall in homicides in the state. And, to no-one's surprise, it defended intelligence and other preventive measures as a way to reduce violence.

So while the fall in homicides, for whatever reason, is to be celebrated many will be waiting and hoping for police violence to fall too.

Last year, opposition parliamentarian Renata Souza, head of the Human Rights Commission at Rio State Assembly, called on the United Nations to investigate the police operations, and UN human rights chief Michelle Bachelet raised concerns about the increase in killings by the police.

Far-right President Jair Bolsonaro, a former army captain who also defends the use of force against suspects, has repeatedly said that "a good criminal is a dead criminal". He and Mr Witzel have supported changes in legislation that would protect officers from prosecution if they kill suspects.

Bolsonaro said criminals would "die in the streets like cockroaches" if the changes were approved. The proposals need to be approved in both houses of the Brazilian Congress to become law, but no date for a vote to take place has been announced.