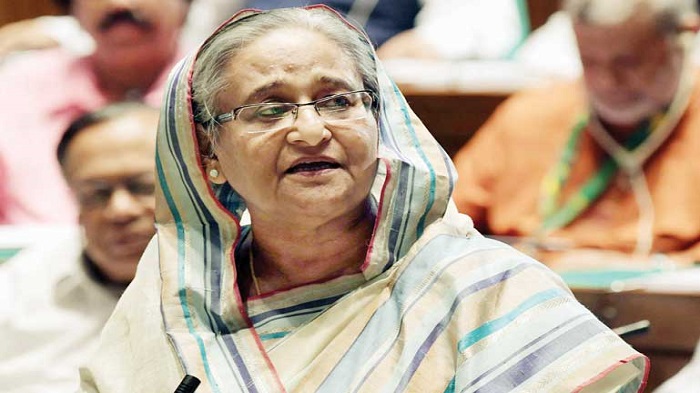 Prime Minister Sheikh Hasina today reiterated her determination to advance the country further by freeing it from terrorism, militancy and corruption.

“We want to take the country forward more and free it from the hands of terrorism, militancy and graft,” she told a “preetibhoj” (lunch) hosted on the occasion of the winter exercise of Bangladesh Army.

Addressing the ceremony as the chief guest, Sheikh Hasina said her government wants the people to remain in peace and safe and get a better and beautiful life. “We’re working to achieve the goal.”

In this connection, Sheikh Hasina quoted the some portions of the speech of Bangabandhu at the first passing out parade of the military academy.

The prime minister mentioned that in the speech Bangabandhu had said: “We’ve brought independence in exchange for blood. This independence will certainly exist Insha Allah, none can destroy it. However, the independence will go in vain, if you can’t bring smiles on the faces of the distressed people. For this, it’s my appeal to you to remain on the honest way.”

Sheikh Hasina, also the elder daughter of the Father of the Nation, said Bangabandhu had made the comments to the armed forces.

The prime minister said her government is working to build modern, developed and well-equipped armed forces in the country so that they can move by keeping pace with the modern world.

“A great task of protecting our independence and sovereignty has been vested in the armed. So, we’ve taken steps for modernising the armed forces and making them well-equipped in arms and ammunition and training so they can move in the world keeping their head high,” she said.

Sheikh Hasina pointed out that the members of Bangladesh’s armed forces are working in various UN missions to maintain peace in different trouble- torn areas.

“Naturally they have to work with armed forces of other countries. So, we want they don’t lag behind (other armed forces) and they will be befitting to keep pace with the world on all sides, including training and arms and ammunition,” she said.

She went on saying: “To attain the target, we’ve taken many initiatives and implemented those (initiatives) … we’re working whatever possible (for modernising and development of the armed forces) despite our resource constraints.”

The prime minister said the armed forces are making massive contributions to the country’s development alongside safeguarding its independence and sovereignty.

“Our armed forces are also playing a commendable role in the socioeconomic development in various trouble-torn countries side by side with maintaining peace there,” she said.

Sheikh Hasina said her government immediately after assuming office took steps to build modern technology-based armed forces. “Besides we’re building Digital Bangladesh and we want no organisation to trail in this regard,” she said.

Putting emphasis on imparting more training to the members of the armed forces, the premier said training is inevitable for any force.

She said her government has allocated Swarna Dweep, formerly known as “Jahaizzarchar” of Noakhali, so that the army could stage exercise and take training throughout the year.