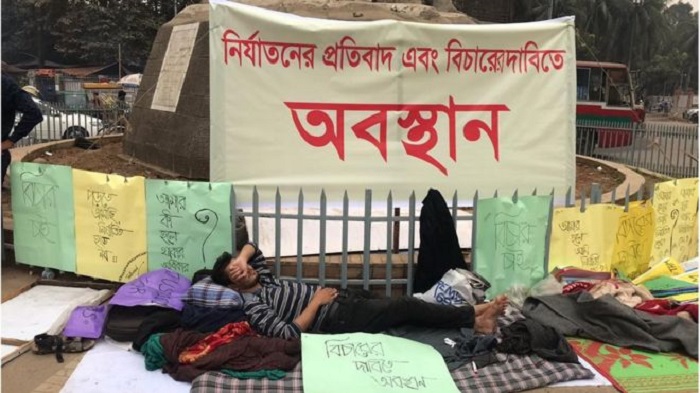 DU student Mukim Chowdhury, one of the four victims who were allegedly tortured by BCL activists of Sergeant Zahurul Haque Hall unit Chhatra League, has been staging a sit-in at the base of Razu sculpture on the campus demanding justice.

Mukim, a student of the Department of Tourism and Hospitality Management, began the sit-in programme at Raju Memorial Sculpture on the Dhaka University campus since Wednesday evening.

Around 50 students of the department expressed their solidarity with Mukim protesting the torture by BCL activists.

Earlier in the morning, they brought out a procession demanding justice for the tortured students and joined Mukim, who has been observing a sit-in protest since yesterday’s 5:00 pm.

“I was never involved with Chhatra Shibir. The BCL men intentionally tortured us. They have no right to torture any students of the university,” Mukim told UNB. “I want expulsion of those who assaulted us. I’ll continue my protest until my demands are met.”