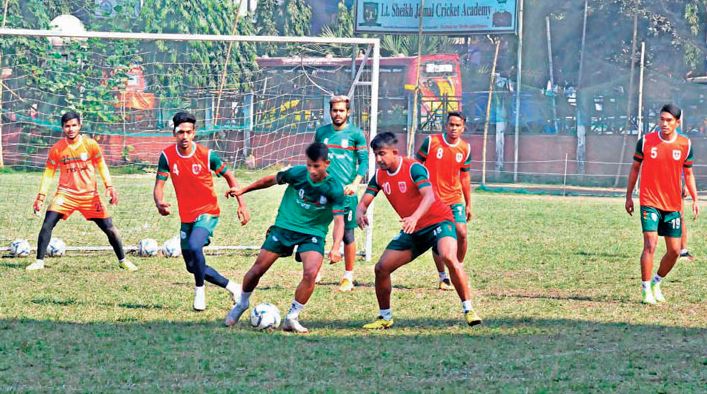 Players of Bangladesh National Football Team are seen during their practice session on Wednesday at Sheikh Jamal Dhanmondi Club playground ahead of their Bangabandhu Gold Cup semi-final match against Burundi today at Bangabandhu National Stadium in the capital. —BFF Photo

The match will kick-off at 05:00pm at Bangabandhu National Stadium in the capital.

The hosts Bangladesh reached the semifinals as Group A runners-up with a win and a defeat. They started their campaign conceding 0-2 goals defeat against tournament’s top seeds Palestine but bounced back to the race crushing Sri Lanka by 3-0 goals in the group matches.

On the other hand, The Group B champions Burundi crushed Mauritius by 4-1 goals in the first game and thrashed Seychelles by 3-1 goals in their second and last group match.

Burundi forward Nshimirimana Jospin is at the summit of the scorer’s list of the ongoing meet. Jospin scored a total of four goals with a hat-trick in the group-stage matches. Among other Burundi scores, Captain Tambwe Amissi scored two and defender Ndikumana Asman scored one. On the other hand, forward Motin Miah netted twice while another forward Mohammad Ibrahim scored one for Bangladesh.

Ahead of the match, Bangladesh Head Coach Jamie Day said that they are full of confidence and feels that Bangladesh have the ability to beat the East African side.

“We played very well in the last match against Sri Lanka, We have scored goals and kept a clean sheet. The match against Burundi is going to be a tough. They (Burundi) have a good attacking side and their players are physically strong but we are going to the game with full confidence. If you play well and perform in a disciplined and organised manner then you have good chance to win,” Jamie said in a pre-match press conference at Bangladesh Football Federation (BFF) house in Motijheel in the capital on Wednesday.

“Our target is to win. We have to defend well as well as take chances to score goals. We will get chances and we have to utilise those. The match may be a hard one for defenders. Our players have to give their best. To win the tournament will be the fantastic achievement for us. So, we will do our best,” Jamie added.

About their preparations for the crucial match, Jamie said, “Boys trained very well in the last two or three days.”

“If you look at Burundi, they conceded early goal but bounced back in the game scoring goals. So, our first target will be to not concede any goal and then we have to take more chances to score. Burundi showed that they can score. We also need to be organised and have to defend properly. We have proved that we can defend well against good teams. We have proved our worth against India and Qatar.  If we do the same against Burundi, we will get more chances of scoring,” The English Head Coach of Bangladesh confidently said.

The men in red and green were handed a blow as their reliable defender Topu Barman is set to miss the match as he conceded a red card in the last match against Sri Lanka.

About Topu’s replacement, Jamie said, “Who comes as the defender in place of Topu, have to keep a clean sheet. Topu’s suspension is very disappointing for us. We have several choices such as Rayhan, Rafi, Manik, Sushanto. We will select Topu’s replacement from them”

Ahead of the match, booters took part in a practice session at Lt Sheikh Jamal Dhanmondi Club Ltd Ground on Wednesday morning. Bangladesh Captain Jamal Bhuiyan joined the rest of team and took part in the day’s training.

On Jamal’s return, Jamie said, “We will make one or two changes in the last playing eleven. Jamal is one of the best players of the team. If he is fit, he will play.”

Concurring with the head coach, Bangladesh Captain Jamal Bhuiyan said, “As Jamie told we are very confident after the match against Sri Lanka. But the next match is totally different. Burundi is a strong striking side. We have to be focused; we have to be concentrated because these guys (Burundi) are not like Sri Lanka. It is going to be a tough match. Hopefully, we will win.”

“Burundi are better than us in rankings, but I don’t think ranking will be gives the total picture. The million dollar question is to predict who will perform well in the semi-final match. If we play well and win, we will achieve something big,” Jamal added.

Bangladesh are 187th in FIFA rankings while Burundi are 151th.

About their preparation against the home team, Burundi Head Coach Bipfubusa Joslin said, “I know Bangladesh are a good side. It will be a good game. It’s not the first time we are playing against home team.  I believe in goals. My philosophy is in the attacking. It’s football, a game of attacks. I am confident of winning.”

“We are going to change our formation against Bangladesh. I don’t depend on two players, all the 11 players are equally important in the game,” Joslin added.