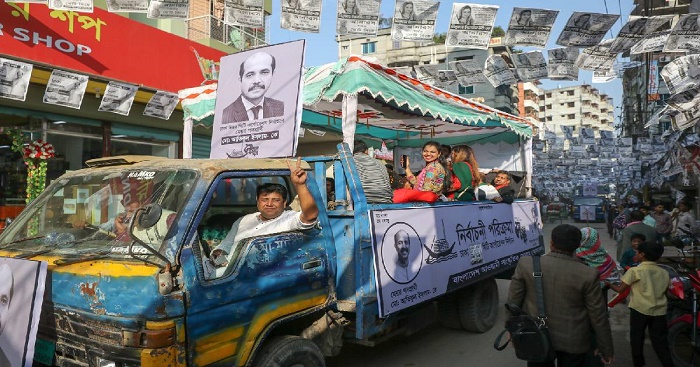 Campaigning has peaked with just over a week left for the elections to two Dhaka city corporations as candidates are doing everything to woo voters in the final days.

One of the most popular canvassing tools is loudspeakers that are playing parodied songs praising the candidates in desperate bids to reach out to voters.

One of the key issues is sound pollution.

According to City Corporation (Election Code of Conduct) Rules 2016, no candidate can use loudspeakers to campaign before 2pm and after 8pm.

“The non-stop high pitched sound from canvassing convoys, vans and rickshaws keeps coming day and night. At times, it keeps on buzzing even after 10pm … this has been causing discomfort to everyone in the locality,” Zinat Raihana, a housewife in Rampura, told UNB.

She said the loud noise generated by campaigners is causing more trouble to the students and sick elders.

Dr Shahriar Hossain, Director General of Environment and Social Development Organisation (ESDO) said these are direct violations of the electoral code of conduct.

Another byproduct of the DSCC and DNCC electioneering is the plethora of laminated posters strewn across the capital. According to data provided by the mayoral and councilor candidates, nearly five million posters were printed in total.

They have mostly been hung across the roads while the loose ones litter the streets.

The High Court banned the use of laminated posters on Wednesday but the sheer number of posters published is still a looming threat to the environment.

Dr Shahriar said the use of laminated posters, which use a type of plastic, will subsequently affect the environment. He noted that the court had also directed removing the posters after the polls.

“What’ll actually happen to these lots Where will they end up They’ll obviously be dumped in water-bodies which will clog the city drainage system,” he told UNB.

He also mentioned about the hazards from the excessive use of laminated posters which will eventually cause waterlogging turn into breeding grounds for mosquitoes.

He told UNB that the careless acts in electioneering by the candidates raise concern as they will be running the city eventually.

Visiting various spots across the city, it was observed that the situation was mostly the same with laminated posters sprawling at every corner while loudspeakers were booming everywhere preaching about respective party candidates.

Bangladesh Poribesh Andolon (Bapa) General Secretary MA Matin told UNB although the candidates and their supporters can justify their acts in the name of election festivity, it could have been done otherwise.

“Politicians don’t prioritise environment. They violate the environment act for electioneering,” Matin said, praising the High Court for banning the use of laminated posters but expressed skepticism about its proper implementation.

BAPA General Secretary mentioned that the organisation will start a campaign soon to reach politicians and make them aware of the environment.

Matin said the politicians have set a bad trend which might continue in future polls. “You cannot campaign in ways that can hamper the environment, that can clog drainage, that cause public disturbance,” he said.

“We have created a situation that could have been avoided easily had all the campaigners acted sensibly,” he said.