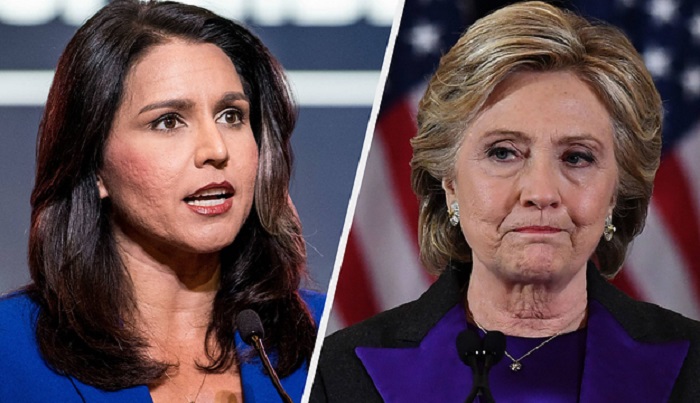 US presidential hopeful Tulsi Gabbard, who is in near the last place among Democrats in primary polling, filed a defamation suit Wednesday against Hillary Clinton after the former secretary of state called her a "Russian asset."

Gabbard alleges that Clinton made the comments in retaliation for her support of Bernie Sanders, the former secretary of state's rival in 2016 for the Democratic presidential nomination.

Clinton never mentioned Gabbard by name, stating only that she was referring to "somebody who is currently in the Democratic primary."

"She's the favorite of the Russians. They have a bunch of sites and bots and other ways of supporting her so far," Clinton said in a podcast that aired in October, adding that "Yeah, she's a Russian asset."

The next day, CNN asked Clinton's spokesman if she was referring to Gabbard. He replied: "If the nesting doll fits."

Gabbard, a 38-year-old Army veteran and Hawaii lawmaker who has criticized US involvement in Syria and received favorable coverage in Russian state media, said Clinton's accusation, which was widely repeated on social media, was "devastating" to her reputation.

She said she had asked Clinton to retract the statement, to no avail.

One of 11 Democratic candidates seeking the party's presidential nomination, Gabbard is polling at 1.3 percent among likely primary voters, according to an average compiled by Real Clear Politics.

Clinton, a former first lady, was the Democratic nominee in 2016 but lost to Donald Trump in the November elections.