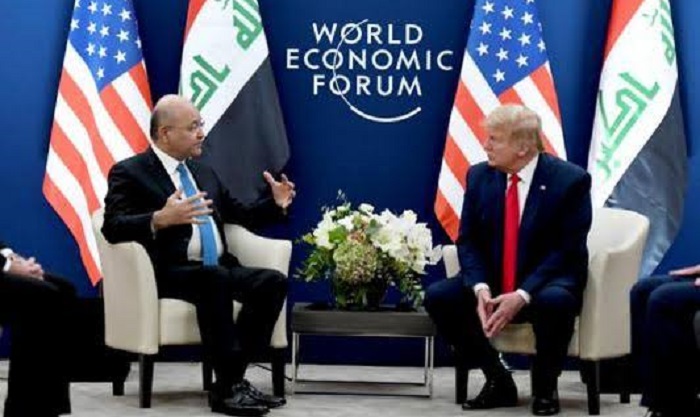 US President Donald Trump and his Iraqi counterpart Barham Saleh agreed on Wednesday on the need for a continued US military role in the country, the White House said.

The two leaders met in Davos, Switzerland, their first meeting since the US killed a top Iranian general in Baghdad, sparking an Iraqi parliament call for expulsion of US troops.

"The two leaders agreed on the importance of continuing the United States-Iraq economic and security partnership, including the fight against ISIS," the White House said. "President Trump reaffirmed the United States' unwavering commitment to a sovereign, stable, and prosperous Iraq."

Tensions between Washington and Tehran boiled over onto Iraqi soil this month, with the US killing top Iranian general Qasem Soleimani in Baghdad and Iran striking back at an Iraqi base hosting American soldiers.

Furious at the US hit, Iraq's parliament voted on January 5 to oust all foreign troops, including some 5,200 American soldiers deployed alongside local forces.

But Iraq's Sunni leaders now find themselves on the other side of the equation -- uneasy about perceived Iranian overreach in their country they have been cautiously lobbying for US troops to stay.

The meeting between Trump and Saleh took place on the sidelines of the Davos conference, which this year is focusing heavily on climate emergency and social inequality.