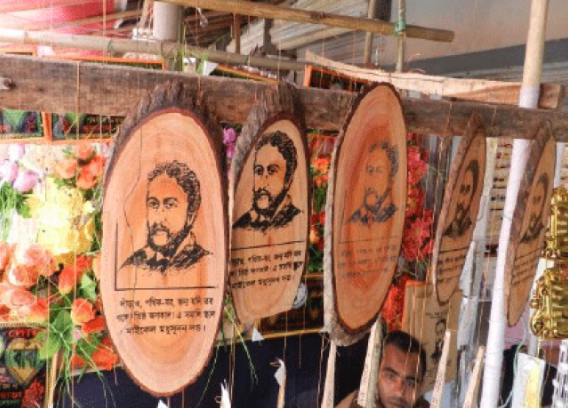 The annual ‘Madhu Mela’, marking the 196th birth anniversary of the great poet and originator of Bangla sonnets Michael Madhusudan Dutt, will begin tomorrow at the poet’s ancestral home at Sagordari in Keshabpur upazila of the district.

Though the annual fair was supposed to begin from today (Wednesday), the authorities postponed the programmes of the inaugural day giving honor to former state minister and local lawmaker Ismat Ara Sadique who died at the age of 78 at a Dhaka hospital on Tuesday.

On January 25, 1824 Madhusudan, often fondly addressed as ‘Mahakavi’ (poet of epics), was born to land lord Raj Narayan Dutt and Janhabi Devi at Sagardari under Keshabpur upazila in Jashore.

Since 1973, a weeklong fair is arranged every year at Sagardari.

Hundreds of people of the region and different parts of the country usually throng the fair every day, she said adding that noted personalities will deliver speeches on the life and works of the legendary poet during different discussions in the fair.

Different cultural organisations in association with district and upazila administration have taken various programmes on the occasion. The Mela (fair) will continue till January 28.

The programmes include circus, sports competition, seminar on Madhusudan’s life and works and cultural functions during the fair.

The entire area wore a festive look marking the fair as over 200 stalls has been set up with handicrafts and traditional products on the fair premises.

Madhusudan Dutt is widely considered to be one of the greatest poets in Bengali literature and the father of the Bengali sonnet. He pioneered what came to be called ‘Amitrakshar Chhanda’ (blank verse).

His first attempt at blank verse was ‘Sharmistha’ in Bengali literature.

Kaliprasanna Singha, who is famous for his translation of the ancient Hindu epic Mahabharata into Bengali, organised a felicitation ceremony to Madhusudan Dutt to mark the introduction of blank verse in Bengali poetry.

“Always, o river, you peep in my mind/ Always I think you in this loneliness/ Always I soothe my ears with the murmur/ Of your waters in illusion, the way/ Men hear songs of illusion in a dream,” are a few lines of his extraordinary creation ‘Kapatakkha Nad’ in which he showed his deep love towards his country and the river.

He was also the pioneer of the first satirical plays in Bengali literature. ‘Buro Shaliker Ghare Ron’ and ‘Ekei Ki Boley Sabhyota’ are among his famous satirical plays.

Madhusudan was a gifted linguist and polyglot as he studied Hebrew, Latin, Greek, Tamil, Telugu, and Sanskrit.

He passed away at Kolkata General Hospital on June 29, 1873, only three days after his wife Henrietta breathed her last. The poet was buried at Park Street in Kolkata.