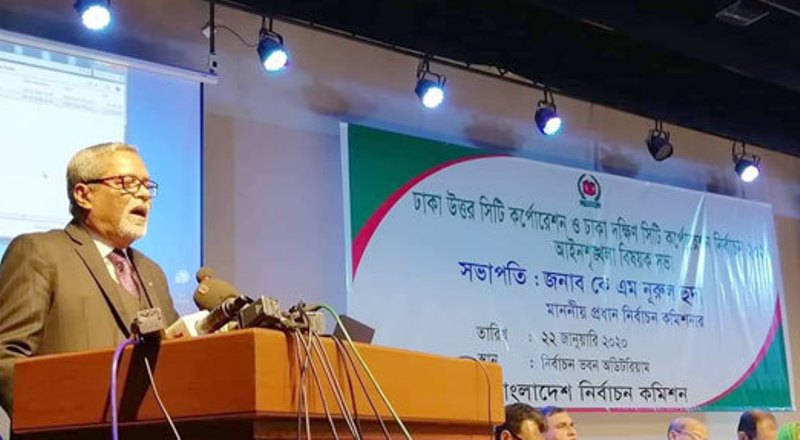 Chief Election Commissioner KM Nurul Huda on Wednesday said they don't want to see any irregularities and defects in the elections to Dhaka North and Dhaka South City Corporations.

“If any complaint of negligence comes, strict actions will be taken against it,” the CEC told top officials of different law enforcement agencies during a meeting with them at the auditorium of the Election Commission.

Expressing  satisfaction over the voting environment, the CEC said, “All eyes are on the voting of the two Dhaka city corporations. Everyone is now in festive mood. It is necessary to carry out proper duty from everyone's own position after realising importance.”

He asked the law enforcement officials to resolve any kind of irregularities at the polling ground.

“No kind of irregularities will be tolerated. If any complaint is brought to us, action will be taken against him/her for the irregularities. No one will be spared,” the CEC said.

The CEC also expressed satisfaction over the immediate action taken over the attack on BNP mayoral candidate during his campaign.

"This is an unexpected incident. The returning officer was asked for an immediate inquiry before filing a complaint. "

Police, Rapid Action Battalion, Armed Police Battalion (APBn) and Border Guard Bangladesh will be on duty at polling centres, while mobile teams and strike forces will be on duty for four days from January 30 to February 2.

The Election Commission is planning to engage some 42,700 law enforcers on election duty to maintain law and order during the two city corporations’ polls in Dhaka on February 1.

Besides, 172 executive magistrates and 64 judicial magistrates will be deployed on election duty to act against incidents of electoral violence and breaching polls code of conduct in election areas.

A platoon of BGB comprising 15 to 25 members will be on election duty while there will be at least 975 BGB members in the capital.

The 16-member team is comprised of four policemen with firearms -- including SI or ASI and three constables, two Ansar members with firearms, and 10 Ansar-VDP members carrying sticks.

There are 2,468 polling stations in two city corporations. Of those 1,318 in DNCC and 1,150 in DSCC. Some 39,448 law enforcers will be needed to ensure law and order situation in and around those polling stations.

Some 43 strike force teams  will act, of which 18 for DNCC and 25 for DSCC comprising Police, APBn and Ansar personnel.

One executive magistrate will be deployed along with each strike force, especially for those comprising BGB men.