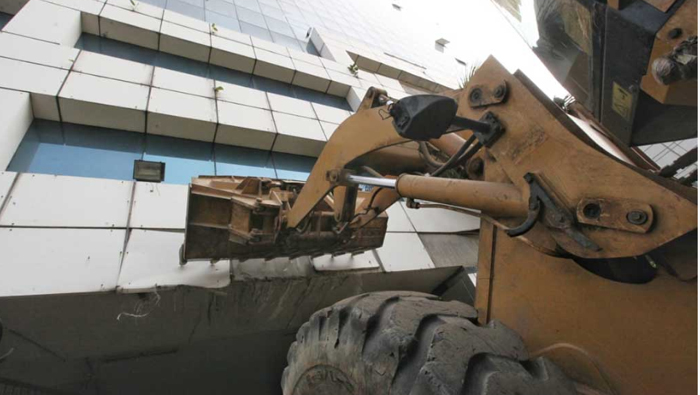 The Rajdhani Unnayan Kartripakkha (RAJUK) on Wednesday began demolishing of the 16-storey Bangladesh Garment Manufacturers and Exporters Association (BGMEA) complex at Hatirjheel in the city on Wednesday.

“This building is an eyesore in the eye-catching Hatirjheel in the city. We have started demolishing the building following the High Court order and the direction of Prime Minister Sheikh Hasina,” said the minister.

The highest security measures have been taken to demolish the structure. Experts from RAJUK and BUET will monitor the demolition drive, he added.

For demolishing the building, RAJUK need not to spend any money, inversely the contractor will pay RAJUK Tk1,027,0000.

Commenting on pollution, the minister said, “We are working for preventing pollution. The current level of pollution in the city won’t be seen in the future.”

Complete demolition of the building will take around six months. Chattogram based “Four Star” company is carrying out the demolition work.

As part of its move to dismantle the building, RAJUK sealed off the BGMEA complex on April 2019.

In 2011, the High Court ordered demolition of the building as it was constructed in defiance of relevant laws, calling it a ‘cancer’ in the lake.