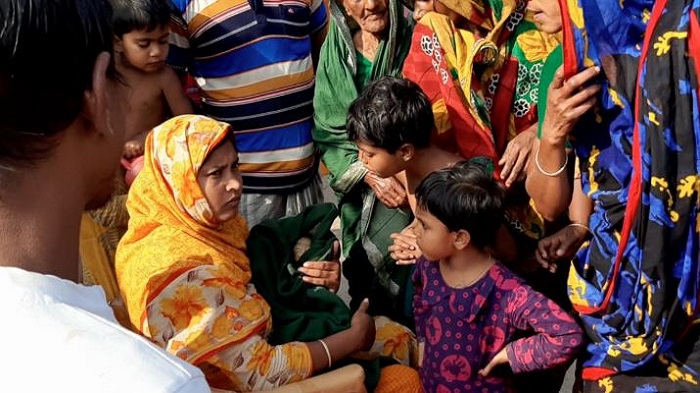 A newborn girl, who was found to be alive after being pronounced dead by doctors, has finally died after 33 hours.

The baby girl who was named Jannatul after the birth breathed her last around 1:30pm on Tuesday.

As the death news spread around, villagers rushed to her house to have a last glimpse of the newborn.

Locals blamed negligence on the part of doctors and nurses of private clinic ‘Uposhom Nursing Home’ for the newborn’s death.

Zinia Khatun, wife of grocery shop owner Abdul Halim of Hajrabati village in Sadar upazila, was taken to the clinic in the district town on Sunday after she went into labour.

Though doctors suggested a cesarean section, she gave birth to the baby girl early Monday normally.

However, nurses at the clinic informed Zinia’s family that she had a stillbirth.

When the family members were taking preparations for bringing the newborn home for burial, Zinia wanted to see her daughter for one last time.

At this point, a nurse of the clinic, pressing the newborn’s throat, said, “See, she is dead.”

However, the mother was adamant to take the child on her lap. And to her surprise, the girl started moving on her lap.

As the family members started screaming, nurses gave the newborn oxygen support and suggested that she be taken to Chuadanga Sadar Hospital for better treatment.

Later, they took her to the district hospital on Monday morning.

Dr Asadur Rahman Malik Khokon, a pediatrician at the Sadar Hospital, said the newborn was born prematurely with pneumonia.

He said they kept her in an incubator. “We tried our best but her condition was not improving. So, we suggested that her family take her to Rajshahi Medical College Hospital.”

However, the family members took her home on Tuesday noon instead of the hospital due to financial constraints, said Jannatul’s uncle Barkat Ali. “When we were trying to manage money for the treatment, Jannatul breathed her last on her mother’s lap around 1:30pm,” he said.

Zinia blamed the negligence of doctors and nurses of the private clinic for the death of her daughter.

She also alleged that Jannatul was left on the floor after she was pronounced dead.