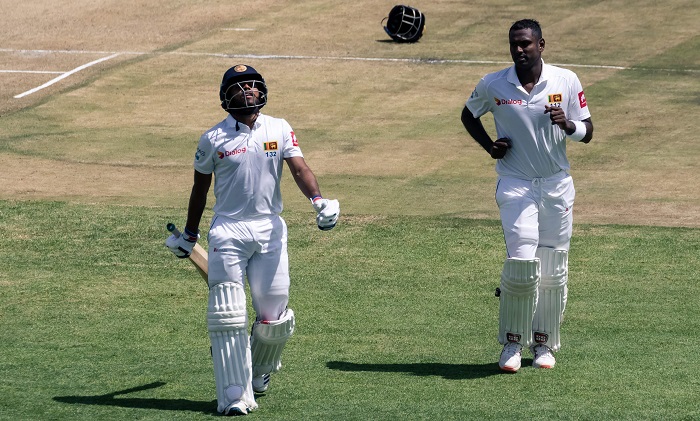 Sri Lanka's Kusal Mendis (L) walks back to the pavilion after his dismissal by Zimbabwe's Victor Nyauchi as Sri Lanka's Angelo Mathews (R) looks on during the third day of the first Test cricket match between Zimbabwe and Sri Lanka at the Harare Sports Club in Harare on Tuesday. –AFP

Angelo Mathews and Kusal Mendis handed Sri Lanka the advantage as their half-centuries helped the visitors end the third day on 295 for 4 - trailing by just 63 - in Harare on Tuesday (January 21).

Mathews was unbeaten on 93 while Mendis laid the platform with his 163-ball 80.

Having kept Sri Lanka on the field for 148 overs, it was Zimbabwe turn to toil as they picked up just three wickets in the day. Dimuth Karnunaratne fell in the first session as he flicked Victor Nyauchi to midwicket to fall for 37. Both Mendis and Mathews then rebuild the innings as Zimbabwe failed to grab the several runout opportunities the pair gave them. In the last over of the first session, Kevin Kasuza was struck on the head while fielding at short-leg and had to leave the field immediately as he looked in a considerable amount of pain.

Mendis and Mathews stretched their association to 92 before Nyauchi struck again. Mendis chased a wide one, lured by the fullish length, and was caught at first slip to give Zimbabwe an opening. Mathews struck a six to move to 48 and then soon after completed his half-century off 154 balls to take Sri Lanka to 205 for 3 at Tea.

Dinesh Chandimal's defiance was ended by Sean Williams in the 82nd over soon into the third session. Trying to loft the ball over the bowler, Chandimal ended up lobbing the catch back to Williams as Zimbabwe continued to stick with the old ball. The new ball was eventually taken in the 89th over as Kyle Jarvis put Mathews in a tangle several times. Dhananjaya de Silva too looked at ease from the other end as he steadily moved to an unbeaten 42 off 73.

With slow going on the first three days, Sri Lanka find themselves in a fascinating position. They will ideally look to bat out the first two sessions on the fourth day and build a significant lead before sticking the hosts back in on the slow surface.