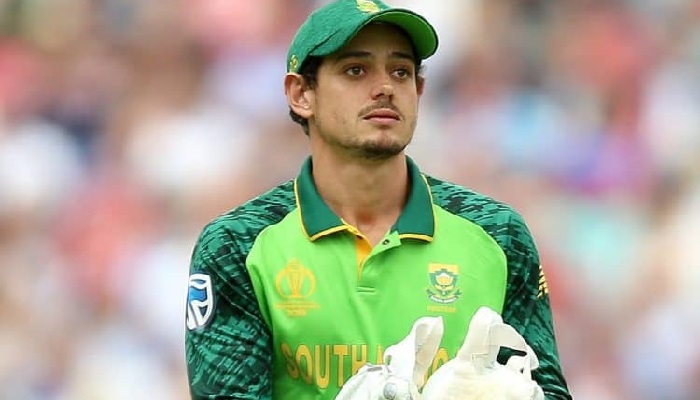 Quinton de Kock, the wicketkeeper-batsman, has replaced Faf du Plessis as the captain of South Africa's ODI set-up for the upcoming three-match series against England, starting on February 4.

Meanwhile, selectors have included five uncapped players - Lutho Sipamla, Sisanda Magala, Bjorn Fortuin, Janneman Malan and Kyle Verreynne.- in the squad. Sipamla, the fast bowler, made his List A debut only in 2017. The promising pacer has 22 scalps at 30.9 in List A cricket. Meanwhile, Sisanda Magala is a well-built quick, who has 113 wickets in List A games.

Malan, the younger brother of Pieter Malan, is an aggressive batsman with close to 2000 runs in List A cricket. He notched up his highest List A score of 170 against Kwazul-Natal in the 2016-17 season. Bjorn Fortuin is a spin bowling all-rounder and has 55 wickets in List A cricket. Verreynne is a wicketkeeper-batsman who averages over 50 in first-class cricket.

CSA Acting Director of Cricket Graeme Smith said on Tuesday (January 21): "We all know the quality of the player that Quinton de Kock has grown to become. Over the years, we have watched him grow in confidence and become one of the top ODI wicket-keeper batsmen in the world. He has a unique outlook and manner in which he goes about his business and is tactically very street smart. We are confident that the new leadership role will bring out the best in him as a cricketer and that he can take the team forward into the future and produce results that South Africans the world over can be very proud of. We wish him the very best in this new role and look forward to watching him make his mark in this series against the World Cup Champions."

CSA Independent Selector Linda Zondi noted: "We are really pleased with the squad we have selected, it is a good indication of the depth that we have in the country. The road towards the 2023 Cricket World Cup starts now and we want players doing well in our domestic structures to see the rewards of the hard work that they have put in. The pool that we build going forward is going to be vital in the selection of that 2023 World Cup squad but also without looking too far ahead, we are confident that we have players that will make South Africa proud in this ODI series against a confident England team."