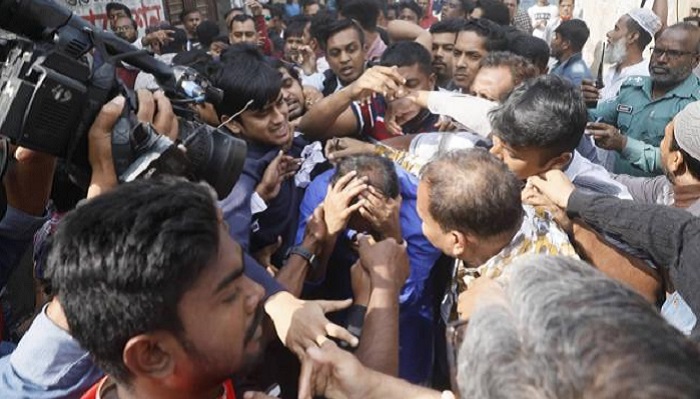 BNP nominated mayoral candidate of Dhaka North City Corporation (DNCC) Tabith Awal accused Awami League men of attacking him during the election campaign in the Gabtoli area in the capital on Tuesday morning.

The BNP mayoral candidate brought this allegation after been attacked by a group of people at Bazarpara area that left Tabith and other 10 to 12 of his supporters injured.

Immediately after the attack, Tabitha alleged that the attack was led by Mujib Sarwar, a Awami League-backed councilor candidate (Push Cart) of ward number 9.

Terming the attack as cowardly one, Tabith vowed to carry out their election campaign in a disciplined way.

“No matter what the attack, no one can stop us. We will carry out our electioneering in a disciplined way,” Tabith Awal said.

Locals and eyewitnesses said Tabith started his election campaign at Bazarpara behind the Gabtoli bus stand at around 11:00 am on Tuesday. The area is under Ward No. 9 of Dhaka North City Corporation. Soon after Tabith and his supporter started their campaign seeking vote for ‘Sheaf of Paddy’, a group of people attacked on them with sticks from the behind. They hurled brick bats targeting Tabith and his men. The attack left 10 to 12 persons including the mayor candidate injured.

However, BNP Central Publicity Secretary Shahid Uddin Chowdhury said they came under attack twice in that area. The attackers swoop on them chanting ‘Joy Bangla’ slogan.